With Guitars and Microphones, B-52s’ Kate Pierson Steps Out On Her Own 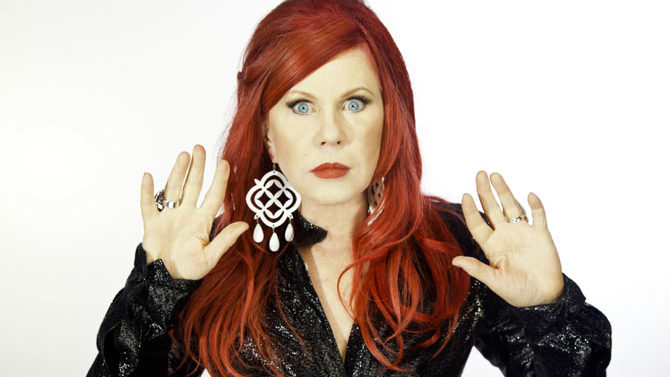 Guitars and Microphones, Kate Pierson’s first solo record after nearly four decades with the B-52s, begins with a song called “Throw Down the Roses.” It’s hard not to understand the tune as Pierson herself throwing down the gauntlet—or at least announcing her arrival. In bold lines leading up to a rousing chorus, the singer slips in and out of several concert cliché roles, from crowd-surfer to hanger-on, only to finally assert an identity independent of all of them: “I don’t need a wristband to tell me who I am.”

Of course, Pierson cautions against reading too much into that song, or others on the album, specifically with regard to her main gig.

“It is definitely drawn from my experience, but in no way do any of these songs reflect any autobiographical thing with the B-52s. In retrospect, it seems like, ‘Oh, I wrote that because I’m breaking out’,” she says, citing the lyric, “there’s an end to the show.” But the B-52s are alive and well, she insists, adding, “We’re playing all over the place this summer!”

Having assuaged any fears of internecine strife in one of Athens’ longest-running acts, Pierson gets down to what prompted her, after all this time, to finally make a record on her own.

“My intention for the past 38 years was to do this,” she explains, but the B-52s’ schedule, plus the desire to have “some kind of life outside the band” led to “several failed attempts when I wrote a bunch of songs” with no firm result. “There was a certain amount of fear in putting out a solo thing and stepping outside the comfort zone of the band,” Pierson admits.

The breakthrough came when Pierson’s life partner, Monica Coleman, suggested she enlist the help of their friend, the Australian-born singer-songwriter Sia Furler, known in mainstream pop circles simply as Sia. Furler agreed, and the couple lit out for Los Angeles from their home in Woodstock, NY with their two dogs in tow and the idea, Pierson says, to “just get it done, you know? Really just put it out there.”

Pierson talks of learning a more structured pop mindset from Sia. “I think, being a pop writer, Sia was thinking in terms of verse, pre-chorus and chorus,” Pierson says. “You can see, from the B-52s’ kind of writing, it never followed that kind of linear structure.”

With this more conventional approach, the L.A. writing sessions proved productive. Pierson brought initial ideas to the studio, which her collaborators then helped flesh out. The key was not to get bogged down too much in detail, she says.

Pierson cites “Mister Sister” as an instance of this technique’s success. The song directs words of encouragement to a budding transvestite, with a joyous, full-throated chorus greeting the performer’s arrival in drag. The real action is in the verses, though, where Pierson delivers the song’s punchiest lines: “Hey Mister Sister, they named you something biblical/ Now you are Debbie Delicious.”

The record features a long roster of guest appearances, including The Strokes’ Nick Valensi. The guitarist’s touch is instantly recognizable as it pops up again and again throughout the album, as on the chorus to “Bottoms Up.” Pierson reserves special praise for Valensi.

“It was just great working with him,” she says. “One of the reasons I called [the record] Guitars and Microphones was that I’m playing guitar on some of the songs… but I hadn’t really played, you know, intently, accompanying myself for a long [time], so I had to re-learn. I was deconstructing the songs, and his guitar parts are so amazing. Simple, but just hooky as hell.”

Valensi’s presence on the record brings things full circle, in a way, with a member of the last big downtown New York rock act teaming up with Pierson, who was part of the CBGB scene in the late ’70s, when the B-52s would regularly make the drive up from Athens.

That era was well represented at a show earlier this year, when Blondie’s Debbie Harrie joined Pierson and her band on stage in New York for a rendition of the B-52s’ “Roam.” For this summer’s string of shows, Pierson will be backed by The Mike + Ruthy Band, who will also play an opening set. Saturday’s show at the Georgia Theatre promises to be a high point of the tour.

“This gig is gonna be a little different,” Pierson says, “so we’ve added a bunch of surprise songs… maybe some surprise guests… there might be some other hits that aren’t B-52s hits.”

Of course, it’s only natural that the Athens show would stand out. “I’m really looking forward to seeing old friends come to the show,” Pierson says. “It’s always great to play Athens, because it’s like coming home.”