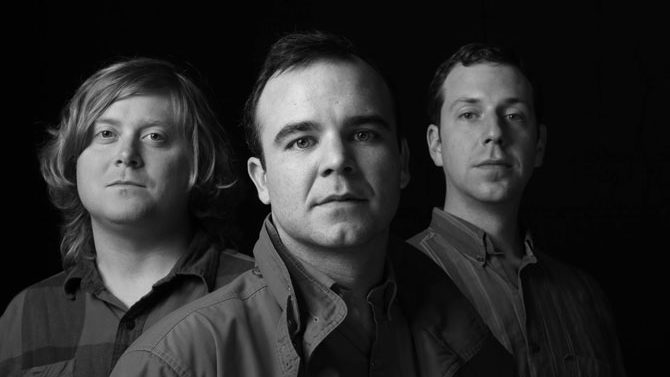 Theatricality and economy don’t often go hand in hand; artists known for giving over-the-top performances are not typically also known for remarkable restraint. The music of Baltimore, MD’s Future Islands, however, showcases an unusual marriage of the two qualities. Frontman Samuel T. Herring might seem to blast off with every note he sings, but his bandmates, William Cashion and Gerrit Welmers, keep him rooted to terra firma.

Herring’s voice, Welmers’ synths and Cashion’s bass are the key elements to Future Islands’ sound. A drum machine (and more recently, live drumming) and the occasional guitar round things out. Welmer and Cashion play off Herring’s dramatic delivery, heightening its impact but never trying to match it or crowd it with theatrics of their own. With such a basic framework, the band’s music never sounds cluttered or overblown.

“When our first drummer left the band after our first album, Wave Like Home, we lost a lot of the power that he brought,” Cashion says. “When we started writing as a focused three-piece, we were trying to find ways to keep the same intensity we had with a drummer.”

Much of that intensity comes from the use of contrast. The band’s latest record, Singles, released last year via 4AD, is a master class in controlled dynamics. Take the opening track, “Seasons,” which opens with a warm, welcoming synth, building through the first verse to a big chorus anchored on a driving, distorted bass line. Then, in the second verse, the band dials it back. Cashion’s sinuous bass rises in the mix; Welmer introduces a new melody in the upper register. The change acts as a chance for listeners to catch their breath before another anthemic chorus.

“That balance between the bass and the keys is a big part of our sound,” Cashion says, “and something we’ve been working with for years.”

Cashion’s bass brings a welcome grittiness to the band’s poppy sound. Towards the end of “A Song for Our Grandfathers,” the other instruments drop out, leaving Herring to sing over a limber bass line, so loose you can almost hear the click of the string against each fret. “With the bass, I try to dirty up the songs, especially live,” Cashion says. “Punk them up a little bit. Drag the songs through the mud.”

Welmers’ synths represent the other side of this coin, with a rich, enveloping tone and an almost endless supply of melody. Where Welmers’ brilliant side project, Moss of Aura, showcases his talents in pure, instrumental form, Future Islands presents the challenge of fitting into a more varied dynamic—playing to complement Herring’s full-throated emotionality and Cashion’s more earthy sound.

The result is a blissful, rounded sound that manages not to be saccharine. It helps, of course, that Herring howls over Welmers’ soundscapes like Tom Jones on ecstasy, his faux-British tones tuneful enough to dance to but too tense to sound cheesy.

This past year has been Future Islands’ busiest to date, even by the standards of the heavy-touring band. Singles raised the group’s profile, leading to appearances on late-night television and at ever-larger festivals. Like fellow Charm City scene veteran Dan Deacon, whom the band credits with helping them out early on, Future Islands is poised to reach an even greater audience.

For now, the trio is focused on immediate concerns, like writing songs for a new album. Cashion mentions another milestone, as well. “The most exciting thing on the horizon is our 1,000th show, coming up at some point this summer,” he says. “We’re planning a big party to celebrate.”