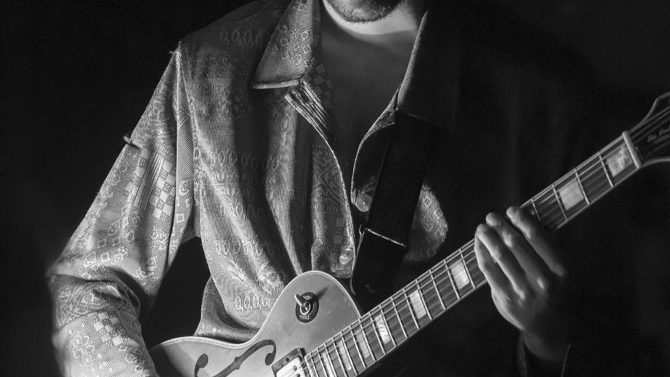 Drummer Gal Lazer is sitting in a Brooklyn studio on the coldest day of the year, waiting for his bandmates Yonatan Gat and Sergio Sayeg to arrive. In two weeks, the three of them will play a show that marks the release of Gat’s latest record, Director, and the start of a six-week tour, but today, they’re focused on putting new material to tape.

Lazer is talking about Bitches Brew, which the band listened to the day before.

“It was like jazz guys doing rock and roll,” he says, describing his reaction to Miles Davis’ iconic work, “but you can hear that they are jazz guys; you can hear that sound.” It’s different for Lazer and his bandmates. “I feel like we’re the opposite, in a way,” he says. “There’s a lot of jazz philosophy involved in this band, but we are punk people.”

Lazer’s assessment isn’t a bad way to approach Director. Each of the record’s 11 tracks is a brief, protean burst of energy. Mostly instrumental, mostly improvised, the album borrows from African and Brazilian music and, like Davis’ masterpiece, applies the technique of creative editing to the sound of a live ensemble captured on tape.

Gat’s guitar forms the center of the record, moving between lithe, bluesy figures and full, soaring chords. Together, Lazer and bassist Sayeg have the textural richness of a free-jazz rhythm section, particularly on “East to West” and “Gibraltar.” The guitar weaves in and out, never overshadowing the other players.

There’s a lot of jazz philosophy involved in this band, but we are punk people.

Unlike the 2014 release Iberian Passage, a collaboration with Igor Domingues on which Gat played all the instruments except for drums, Director is the work of a band acting as a cohesive unit. It’s also more stylistically diverse. While Iberian Passage sought to capture the music Gat was hearing in Portugal, Director pulls from a broader palette.

Arriving at the studio in Brooklyn, Gat explains, “I think if Iberian Passage is the beginning—it’s more of an EP—then maybe [Director] is an LP. It’s more of a global experience, and less focused on one place.”

Gat is best known as a co-founder of Monotonix, the frenzied Israeli garage-rock outfit with an unforgettable live act. Athens crowds will remember the band from its local DIY performances and opening sets for Dark Meat, the latter of which offered the thrilling spectacle of seeing the bare-bones trio rival the headlining group’s sprawling, maximalist intensity.

Like Monotonix, Gat’s new band makes a point of setting up on the floor of the venue, among the audience. One obvious plus of that approach is immediacy, an aspect that the band’s improvisational style enhances.

“When you improvise,” says Gat, “your brain is working a little bit differently, because you don’t know what’s going to happen, so it kind of forces you to stay sharp… When you improvise, you have a tendency to get excited yourself, and I feel like that excitement just moves from the musician to the listener.”

Recorded live in the studio, Director captures that feeling beautifully. Performing in venues, the band retains a warm, dry sound by not running its instruments through the house PA; the album captures that unfiltered feel and also the band’s spontaneity. Davis comes up again when Gat describes the progression from studio session to finished product.

“The record was like three or four hours of recorded music, which we edited down—probably in a little bit of a similar way to Bitches Brew—to 30 minutes.” Stepping into the Teo Macero role in this case was producer Chris Woodhouse, who also helped weave in field recordings Gat had made to round out Director’s sound.

The band pairs its innovative, improvisational approach with an ambitious drive. February’s recording session followed another recent studio outing with legendary engineer Steve Albini, samples from which showcase a more prominent, aggressive rhythm section. Gat is committed to using the sessions as opportunities to evolve.

“I’ve made records before,” he says, “and being in the studio is not exciting in itself; it’s more about what we do in the studio.”