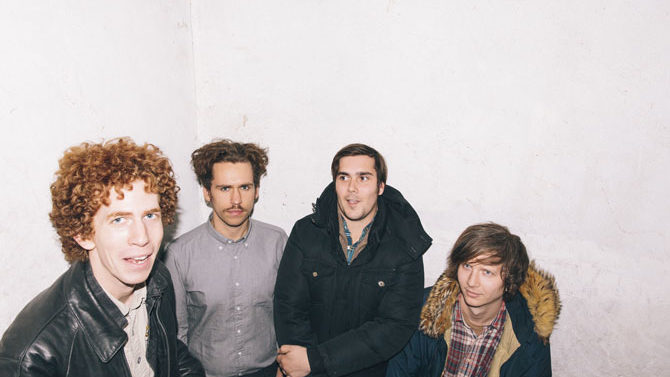 The music video for “Sunbathing Animal,” the title track off the first of Brooklyn band Parquet Courts’ two 2014 releases, is, for my money, the coolest video of last year. It’s surprising that a band so self-avowedly attached to the tangible could produce such a compelling statement in a web-first medium linked mainly to advertising revenue—especially considering that the clip consists of a single shot of a cat pacing around on a sofa.

“The cat was supposed to be sleeping the entire shot,” explains Parquet Courts’ Andrew Savage, “so it was supposed to be even less compelling.” Savage, who wrote the song, also directed the video with help from Andy Capper. In the last 20 seconds of the video, Savage’s reflection appears in a mirror, gripping a hairbrush and singing along to the song’s climax.

The karaoke parody caps off what seems like a series of self-aware jokes. The lack of action and generally boring look comment on the clip’s status as mildly entertaining clickbait. Given the ubiquity of cat memes online, the subject of the video is a further irony. It’s online media rebelling against its context—anti-content.

Meta-critique aside, the monotony of the video actually serves the song: Most of “Sunbathing Animal” is one chord. Besides the literal depiction of the title character, there is also a jarring disconnect between the tranquil domestic setting and the music’s clanging noise, a tension that reflects the anxiety in the lyrics. “I wanted to represent the song with imagery that would sort of reinforce the message in it,” says Savage.

I’m cognizant that the band should be represented on our own terms.

Parquet Courts—guitarists Andrew Savage and Austin Brown, bassist Sean Yeaton and drummer Max Savage, Andrew’s brother—rose to prominence with 2012’s surprising breakthrough, Light Up Gold, originally released on Savage’s own Dull Tools label and later reissued by What’s Your Rupture?/Mom + Pop. As Light Up Gold took off, the band was compared to luminaries like Television and Pavement. Pitchfork and Spin ran profiles. Rock critics stopped pretending they liked Grimes so much, thrilled to write about guitar music once again.

With heightened exposure came conflicts with the band’s DIY roots. Savage refused invitations to appear on late night TV and license music to sitcoms. “I’m cognizant that the band should be represented on our own terms,” Savage says. “Anything that bears our name, I want it to come from us, so that people, fans, can see that they are getting something real.”

This is hardly a new or radical stance, and yet those writing about the band have treated such concerns with condescension; a profile in the New York Times begins with the author drawing weighty conclusions from the fact that Savage doesn’t use a smartphone.

By contrast, Savage’s lyrics deal eloquently with these issues, most especially on Content Nausea, the follow-up to Sunbathing Animal, recorded on 4-track by Savage and Brown and released last November under the “Parkay Quarts” moniker. The album’s title track is an extended impressionistic rant against the dark side of the digital age.

Savage says nothing that hasn’t been said before; the song’s impact comes rather from the inventiveness of his language and the sheer moral force in his delivery: “Overpopulated by nothing/ Crowded by sparseness/ Guided by darkness/ Too much, not enough/ Content, that’s what you call it/ An infant screaming in every room of your gut.”

It’s here where accusations of self-righteousness might start to fly, but the band is ahead of it all. “Punk songs,” Savage sings on “Pretty Machines,” “I thought that they were different/ I thought that they could end it/ No, no it was a deception.” Savage knows he’s implicated as well, and his forthrightness lends authority to the critique. He sings with plaintive disillusionment, attached to his old stance but recognizing its limits. “Crowded, loud and crimson was my view from the pit/ I was wild, I was weird/ I was shackled to it.”

Music videos are hardly Parquet Courts’ main focus, and rightly so: In just over two years, the band has made three brilliant and distinct-sounding records. And in branching out, they’ve succeeded on their own terms. “I like tangible, physical things,” Savage says. “Something important gets lost in the digital realm. That is, if it isn’t done right. It can be done right.”