The Best Bets for Live Music on Halloween 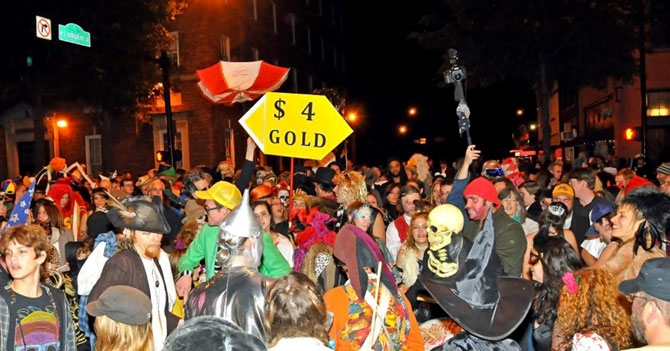 Generally speaking, Athens goes H.A.M. for Halloween regardless where it falls during the week. But as is the case this year, on the occasion Oct. 31 is a day when most folks don’t have to wake up for work the next morning, you can expect more than just fun-sized debauchery.

The centerpiece of the Classic City’s spooktacular celebration has, for six years running, been the Wild Rumpus Parade and Spectacle, a campy, somewhat unhinged (but still family-friendly) procession open to all costumed comers and to those who just like to watch.

Folks wishing to participate in this year’s parade of ghastly ghouls and too-soon topical tomfoolery can gather on the corner of Pulaski and Clayton streets at 8 p.m. The march starts at 8:30 and culminates a half-hour later on the west end of Washington Street, where an outdoor stage will feature live music from event founder Timi Conley and his Rumpus Band, as well as the High-Falootin’ Scallywags Drum Brigade and a trapeze show courtesy of the Tiger Girlz.

At 10 p.m. and into the wee hours, the Max patio hosts the official after-party for adults, featuring music from Powerkompany and the Booty Boyz. Donations from the event, as well as all this year’s Rumpus happenings, benefit the Athens Land Trust.

As usual, in addition to Rumpus fun, there are a ton of other music-related events taking place on All Hallow’s Eve, er, evening. Below, we’ve listed our best bets for those looking to celebrate Athens’ (un)holiest holiday in the most Athens way.

The Paul Collins Beat, Casper and the Cookies
The World Famous · 9 p.m. · FREE!

Underground legend Paul Collins has made the Classic City a regular stop on recent tours, and for that we can be thankful; his latest record, Feel the Noise, is as strong an effort as the power-pop mainstay has released in his storied career. No word on whether his Beat will be doing anything particular Halloween-y for this free show, but expect eccentric locals Casper and the Cookies to pull out all the stops.

It’s always a special night when the Truckers grace an Athens stage, but having them back in town on Halloween sweetens the deal substantially. “We are going all out” for this show, frontman Patterson Hood tells Flagpole. “[Artist] Wes Freed is designing a special poster, and we have a Hollywood FX makeup artist replicating what he draws upon our faces. It will be badass. Plus, we’ll play a Rock Show!” Hood adds, mysteriously: “Trick or Treat?”

The “Satanic BBQ and Potluck,” as this event’s being cheekily billed, features music and food (while it lasts; attendees are encouraged to bring a dish) and is hosted by local garage-punk outfit Shehehe, a band known to bring the party on even the weakest of weeknights. Local ska troupe Lowdive and Atlanta’s Starbenders, who blend sweet pop hooks with proto-punk power, round out the bill, while DJ Kung Fusco and Mr. Purple kick things off with a ’70s-centric set.

The Rick Fowler Band has been sidelined for much of 2014, after guitarist Michael Doke endured a shoulder injury and doctors discovered frontman Fowler had suffered a mild stroke. The bluesy band returns to the Melting Point stage along with bar-rockers the Back Alley Blues Band for a night of spooky licks and costumed celebration. “Thanks to some great doctors and months of intense recovery efforts by both Michael and Rick,” writes Fowler in an email, “RFB is finally back in shape and ready to rock.”

The only explicit “covers show” on this list—surprising for a town where cover bands once seemed to outnumber the rest—is at the Caledonia, where three local groups pose as their heroes, including The Powder Room as grunge icons Nirvana, Come What May as rockist faves Weezer and Thayer Sarrano and friends as chameleonic Brit singer-songwriter PJ Harvey. Expect all three groups to do their source material justice, even if this does end up as the most booze-soaked show Friday night.

Two Elephant 6 institutions play the most storied club in town: a recipe for an instant classic no matter the occasion. With the ongoing citywide “Athens Celebrates Elephant 6” series shedding renewed light on the influential local collective, look for this show to be a blowout. Says Elf Power’s Andrew Rieger: “We will be playing some demonic, evil and Halloween-themed songs from our own catalog as well as popular favorites.”

Some of Athens’ most buzzed-about talent takes the tiny Go Bar stage Friday to play covers and rock costumes while the scenester institution’s skeleton crew slings PBRs ’til last call. Local punks Muuy Biien pose as glam icons T. Rex, and look out for Shade’s set especially, says frontlady Phelan Lavelle: “We recruited Ben Salie from the Pinecones and Aaron Gentry of Dream Scene fame, and we are going to be classic-rocking our brains out. We’ve got some Sleep, some Pentagram, some Wire, some Patti Smith, a buncha shit.”