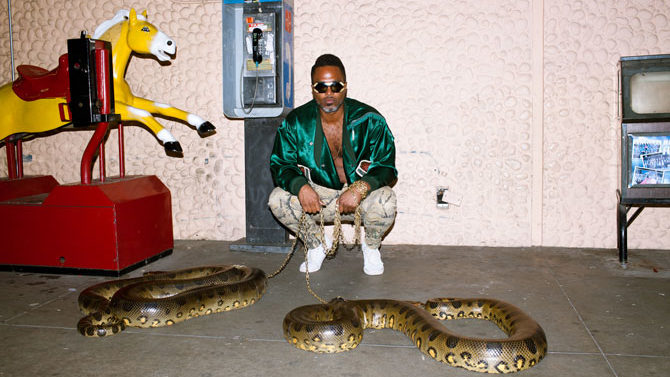 Most music sounds like other music. Children learn by imitation, and it’s hard to outgrow that pattern, which stirs in artists of any age who have been struck by the work of their betters. It’s through the imitator’s personalization that music grows and develops. It’s a very natural state of evolution.

This theory still does not explain the music of Shabazz Palaces, which speaks less to evolution than mutation; there is no clear predecessor. The Seattle-based duo of MC/multi-instrumentalist Ishmael Butler and percussionist/multi-instrumentalist Tendai “Baba” Maraire is electronic, but not repetitive. It’s ostensibly based in hip hop, but is several leaps further into radical sound-based composition than anything currently on the radio. (Butler, for his part, did his stint in the mainstream with his group Digable Planets, which had a hit with “Rebirth of Slick [Cool Like Dat]” in 1993.)

The source of Shabazz Palaces’ uniqueness stems from its process, which attempts to remove the barriers between the members’ truest selves and the finished product. Live, the pair tinkers constantly with a small setup of samplers, keyboards, effects and percussion. There is no DJ; Butler and Maraire physically regenerate their sprawling, psychedelic songs—or, rather, they re-imagine them.

“We don’t really try to recreate the album when we play live,” says Butler. “We see the live performance as being something totally different, where what we make in the studio is a reference point, and really, a point of departure. The two are related—but not very closely.”

Whether in the studio or onstage, the group uses these performative means to reach purely personal ends. You can hear it in its celestial, floating-tempo musical space, born of original invention, not re-appropriation. The first step in this process is a limitless starting point, says Butler. “We use every instrument you can think of in the studio. All kinds of drums, all kinds of keyboards, all kinds of drum machines.”

What we make in the studio is a reference point, and, really, a point of departure.

When writing, “we come up with the idea from something spontaneous and then we try to capture that so it’s not getting filtered through anything else,” he continues. “If we can have spontaneous moments that are directly related to our instincts as musicians and writers, then that’s how we’re gonna get some originality, more so than trying to figure out how to compose something really structured and standard.”

The results, as documented on Shabazz Palaces’ recent sophomore LP, Lese Majesty, reflect those efforts. While the essence of hip hop courses through the music’s attitude and atmosphere, gone is the classic process of sampling a beloved record and rendering it one’s own. Golden Age techniques are replaced by something like the musical equivalent of free associative writing, an intuitive set of movements and gestures that key into Butler and Maraire’s deepest intentions.

Compared to the army of source sounds they employ in the recording environment, the small selection of tools the duo uses live might seem confining.

“I don’t feel like it’s limiting,” Butler says. “It’s less stuff, but I’ve heard people just clapping their hands and singing that have played some of the most far-out shit I’ve ever heard. These are songs that have, over time, given way to some other rhythm or some other riff. We might stop the original song altogether and just take off on this whole other flight, make up some new words, make up some new chorus, make up some new melodies.”

This embrace of an unknown endpoint stems from innate musical traditions. If much of Butler’s aesthetic rings true with jazz fans, he’s a student of that world; Digable Planets sampled Art Blakey, Herbie Hancock, Rahsaan Roland Kirk and others. Maraire is the son of Dumisani Maraire, a Zimbabwean mbira master who taught ethnomusicology at the University of Washington.

Likewise, Shabazz Palaces’ approach wasn’t born of some lightning-bolt epiphany; it arose so naturally that it barely registers now as a shift in Butler’s thinking.

“There was a time when I felt like performing and making music [had] to be more spontaneous than it [was] mapped out and composed,” he says. “I just felt like I wanted to have that be more part of my endeavor than just sampling and tracking out stuff, that kind of thing. It just changed for me at some point.”

However he arrived, by refusing to be anything less than himself, Butler found his new direction. His music reminds us that evolution doesn’t always have to be a slow process or a leap into the future: The way forward often resides within.

WHO: Shabazz Palaces, Pattern is Movement
WHERE: Georgia Theatre
WHEN: Wednesday, Aug. 27, 9 p.m.
HOW MUCH: $10