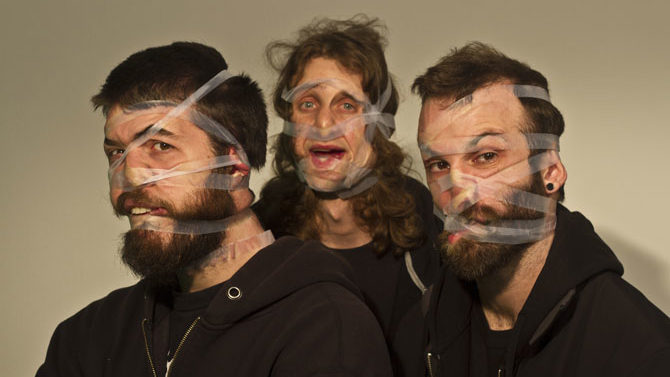 In 2010, Bryan Aiken and Sean Peiffer were at a crossroads. Lazer/Wulf, the band they had formed as students at UGA, had lost members to job prospects and relationships. Aiken was still playing music with Bit Brigade and ‘Powers, but still, the two felt discouraged, and they were considering giving up music for more practical pursuits.

But, Aiken explains, “In late 2010, Sean and I saw Cinemechanica and Manray play together at the Caledonia and made the decision on the spot to come back to music as our primary goal—to get Lazer/Wulf back together and see how far we could take it.”

Writing via email from Europe, where the now Atlanta-based Lazer/Wulf is on tour, Aiken describes that night in no uncertain terms. “That show saved my life… Our lives had been getting pretty dark, and it shook us awake.”

Years after this epiphany, the resolve that show sparked has culminated in the band’s debut full-length, The Beast of Left and Right. The record is a dense, complex statement; Aiken was adamant that it reflect the band’s renewed commitment.

“When we decided to re-form, I was obviously thinking a lot about choices and paths, about going back and correcting past mistakes, and that informed my creative process. I knew whatever [the album] was going to be, it needed to be something that required dedication… I wanted that self-awareness to color the entire album. So, I built it into the structure.”

The effort that went into Beast is evident. The record is written as a palindrome, with rhythms, melodies, chords and riffs mirrored across its nine tracks. This means, for example, that track 9 uses the same rhythm from track 1, as well as the same riffs and chords, transposed from minor to major key; similarly, tracks 2 and 8, 3 and 7 and 4 and 6 are all in conversation with one another, with track 5, the centerpiece, incorporating rhythmic and harmonic elements from throughout the album.

The lofty compositional concept is paired with high-energy execution. The first track, “Choose Again,” opens on an ominous minor chord. What sounds at first like a drum fill reveals itself to be one long, intricate beat, stretched over two full 4/4 measures, parts of Brad Rice’s kit resounding in the left and right stereo channels. In comes the guitar with a riff laid over the contours of the drum beat; the bass follows soon after with a complementary line.

The song continues through seemingly endless variations on the initial riff. Often, the three players will move slightly apart at the beginning of the first measure, only to fall into lockstep at the end of the second, converging in staggered triplets, or a quick sixteenth note figure on the guitar echoed by a doubled-up bass drum. This keeps up for eight minutes, with a peak near the five-minute mark, when the vocals come in over a sustained barrage of bass drum and a unison figure from the guitar.

This is heavy music, certainly, but the band’s range is too broad to fit snugly under any one label. The drums and dead strums that start off “Lagarto” give way to a tight harmonizing guitar riff with a gripping melody; the song moves through a thrilling range of sounds in just four minutes. “The Triple Trap” opens with a dynamic syncopated figure worthy of Battles, and “Mutual End” builds to a cavernous atmosphere, with soaring vocals that recall Bambara, another group with Athens roots making music that’s heavy on the surface but has a lot going on beneath.

Aiken emphasizes the role of Athens’ eclectic music scene in his band’s identity. As for labels, he says, “We always just call ourselves an ‘experimental trio,’ because it’s the most honest answer, and it keeps people from bringing their own expectations to our music.”

In putting together The Beast of Left and Right, the band extended the palindromic concept to the visual component, as well. The group’s members handled the design themselves, with Peiffer photographing the cover and Aiken making paintings for each song. Ryan Olivera, whose brother Derek plays additional drums on the record, built the altar featured on the cover. (The latter two played in the now-defunct Manray, one of the bands that inspired Lazer/Wulf’s return.)

Lazer/Wulf comes home from five weeks of touring abroad just in time for the record’s release with a show at the Caledonia and will be back out again across North America in the fall. And with the album pressed and ready to go, the band is free to let loose in concert.

“We’re very deliberate in our songwriting,” says Aiken. “But we play like a punk band live. We take the time to craft these delicate vases, just to smash them over people’s heads.”