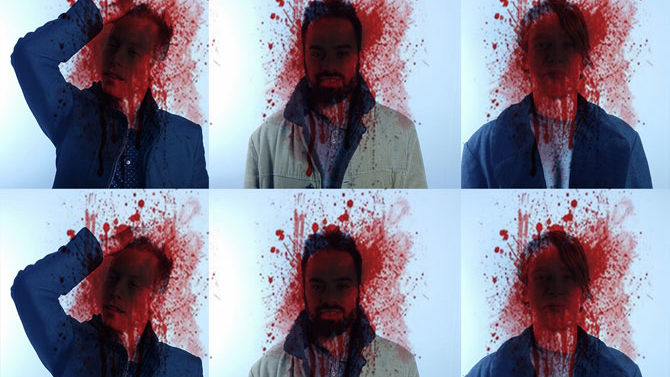 Toronto band Odonis Odonis bounces between genres with gleeful menace. Forty seconds of boilerplate noise starts off the band’s latest record, Hard Boiled Soft Boiled, giving way to the clubby kick drum that opens “Are We Friends.” A snare soon comes in, introducing a firm four-on-the-floor groove, the kind of generic dance beat you might hear in a Michelob Ultra ad. Some sprockety noise ramps up the left stereo channel, and you think you’ve got the band pegged.

Then Denholm Whale’s bass comes in, sludgy, ugly, nightmarish, with an angular guitar hovering predatorily overhead and vocals less sung than intoned, like a judge passing sentence. Even with all this, though, the song doesn’t give up its clubby vibe—there’s even a hi-hat that comes in, playing 16th notes. It all keeps up for just under three minutes, and then a fast, loose rock rhythm starts off “Order in the Court,” and Odonis Odonis is off in a completely new direction.

The group practices a kind of sinister eclecticism—sinister because, for all the styles Odonis Odonis passes through over the course of the record, there’s a constant tension, a sense of unease. This holds true even at its most triumphal moments, like the anthemic “Mr. Smith,” which powers through a single verse and chorus to a guitar-led peak, only to devolve into an ominous, dissonant wreck in the final half-minute. The quick-clip electro-pop of “Angus Mountain” features both the album’s catchiest melody and the bummer refrain, “She never loved you anyway.”

This murky, hard-to-pin-down territory seems to suit Odonis Odonis just fine. It’s hard not to sense a coy, tongue-in-cheek note to the band’s self-applied—and strangely apt—label, “industrial surf-gaze.” And singer and guitarist Dean Tzenos seems cheery enough; speaking to Flagpole over the phone, Tzenos describes the idea behind the band’s cover of “Ring of Fire” in fittingly prankster-ish terms. (“What would it be like if Johnny Cash and Big Black were mixed together on one track?”)

Translating the songs on Hard Boiled from record to live show, Tzenos says, offers the group yet another opportunity to experiment with new styles. “If you’re coming to the show, you’re going to expect something slightly different,” he says, citing one track, “Breathing Hard,” as an example. “It has more of a psych-rock sound on the record, and we kind of pulled it out of that and made it more of a post-punk song.”

In recreating its sound live, a big assist comes via drummer Jarod Gibson’s custom-built kit. Gibson favors an electronic setup, which allows him to program different sounds to meet the sonic needs of any given song. The kit evolved, Tzenos explains, after early experiments using a live kit to play songs recorded with electronic drums left the group dissatisfied. The sound was too limited and placed the band too firmly in “rock band territory—and that’s definitely not what we’re trying to go for with this project,” says Tzenos. “We want to maintain the lo-fi feel for certain tracks, or be able to really amp up the songs with huge subs.”

Gibson’s setup lets Odonis Odonis have it both ways: The group has access to the dynamic range of re-programmable drum sounds, but isn’t locked into the set tempo of a pre-recorded backing track. The latter “was never an option for us,” says Tzenos. “It really makes everything feel stiff.” Thanks to Gibson’s tech savvy—“he’s patented a few things on his drum kit that no one else has,” Tzenos claims—the band keeps alive the flexibility of live performance. “It’s a real drummer. It’s no different—[the kit] just happens to be using triggers instead of, you know, skins.”

Odonis Odonis has emerged from the vibrant Toronto scene based around the Buzz Garage, a now-defunct DIY space that served as an incubator for a number of bands just now starting to gain notoriety in the U.S. (Tzenos mentions acts like Soupcans and TEENANGER.) Tzenos also points out one remarkable aspect of the Toronto scene: In addition to the different kinds of collaboration that you’d expect to see coming out of such a tight-knit milieu, there is also a strong sense that one band’s success should lead to success for others. Unlike in some other cities, where Tzenos says he sees more segregated musician communities, in Toronto, “everybody’s been trying to prop everybody up, so we can make more of a splash all together.”