The Steady, Heady Buzz on Axxa/Abraxas 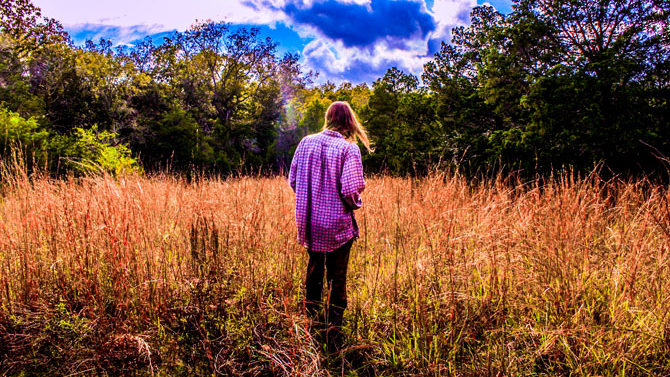 “I’m just waiting for one of my buddies to get off work so I can go over to his house and use his Internet,” Ben Asbury says. “Ours has been out for a little over a day now. It’s terrible.”

Unlike the typical 23-year-old, Asbury isn’t worried about keeping up with his Facebook feed. Instead, the mastermind behind psych-pop project Axxa/Abraxas is itching to add three freshly dubbed tapes to his RTA Art Collective‘s web store. Asbury is musically involved with all the recordings. One features some of his early experimentations, another is a spooky, lo-fi electronic collaboration and the third, he says, is an “improv-punk-noise thing that I have with some friends of mine who don’t really play music.”

Prolificacy has never been a problem for Asbury, who began RTA as a way to document his and friends’ creative endeavors while in high school in suburban Atlanta and started recording as Axxa/Abraxas in Athens in 2010, while working on a psychology degree at UGA.

Even so, “the first three years I was [in Athens], I was still coming into focus, musically and artistically,” he recalls. It wasn’t until his final year in school that he felt his work was fully formed enough to release to the public. After carting a stack of copies of Axxa/Abraxas’ debut cassette, Time Inside, to Wuxtry Records, Asbury says he was heartened by the response he got from the store’s clerks (“of course they all knew me, because I spent way too much money on records,” he notes).

Wuxtry employee and local musician John Fernandes, a personal hero of Asbury’s for his role in the Olivia Tremor Control, was particularly stoked on Axxa/Abraxas’ washed-out yet weirdly dulcet sounds. “That was probably the biggest thing for me,” says Asbury. “Of course, it was at the very end of my time [in Athens]. But the support from all those dudes was a big confidence boost.”

It was that support, he says, that inspired him to start mailing out CD-Rs to some of his favorite labels, including taste-making Brooklyn outlet Captured Tracks, an imprint known for releasing lo-fi pop and garage-rock gems from critically acclaimed artists like Thee Oh Sees, Mac DeMarco, Beach Fossils and others. The unsolicited demo was a hit at the label’s headquarters.

“They found the demo about five months after I sent it, and got in touch with me via text message,” he says. “It was a really weird way to start off the relationship.”

That relationship has proven fruitful. On Tuesday, Mar. 4, Captured Tracks will release Axxa/Abraxas’ self-titled LP. The album, recorded at the label’s behest by in-demand NYC engineer Jarvis Taveniere (of psych-folk outfit Woods), is already gathering considerable attention from the blogosphere.

The two singles that have been pre-released point to a marked increase in fidelity from Asbury’s early recordings. The first, “I Almost Fell,” oozes sonic bliss, replete with jangly, swirling guitars and a coy but confident ’60s-psych vocal turn from Asbury. Axxa/Abraxas has never sounded cleaner or more direct; thanks to the studio-assembled backing band, which includes Taveniere, Asbury’s lo-fi meanderings have been transformed into concise nuggets of pleasure-pop gold.

The second track, “On the Run,” finds Asbury taking further advantage of the full-band setup, carving out four delightful minutes of noisy but closely controlled rock and roll mayhem. As a garage-punk anthem, it bests anything onetime genre saviors Black Lips have done of late. More than that, buoyed by Asbury’s calmly psychotropic vocals, it seems a deliberate update on the acid-skewed pleasure-zone melodicism purveyed by the songwriter’s Elephant 6 heroes.

Asbury is now based in Asheville, NC, where he finds himself among longtime friends and at the center of the profuse tape-trading community that has arisen in that city over the past half-decade or so, one amidst a flood of young creatives who have journeyed to the sleepy mountain burg to be free and fertile and make weird music together. He will make his way back to the town that set him on his current path this weekend for an album release show at Normaltown hotspot Hi-Lo.

Sunday’s Athens date will be the first club performance for the new full-band Axxa/Abraxas lineup. Even as the upcoming record deviates from his project’s lo-fi beginnings, Asbury says the group’s current live sound represents yet another shift.

“I wouldn’t go into the show expecting it to sound like the album. It’s a lot more thick-sounding and a little more aggressive… I feel like that’s good for this kind of music, ’cause it gets people moving and dancing. There’s a lot more intensity there, where there would’ve been subtlety on the record.”

Always adapting, Asbury looks to take advantage of his rising star with an upcoming East Coast tour. But while his confidence is clear, he betrays a hint of surprise while discussing his newfound hot streak. “It’s kinda weird,” he says. “I’m still taking it in.”

WHO: Axxa/Abraxas, The New Sound of Numbers, Mallprowler, visuals by Eye Gate
WHERE: Hi-Lo Lounge
WHEN: Sunday, Mar. 2, 8 p.m.
HOW MUCH: $5