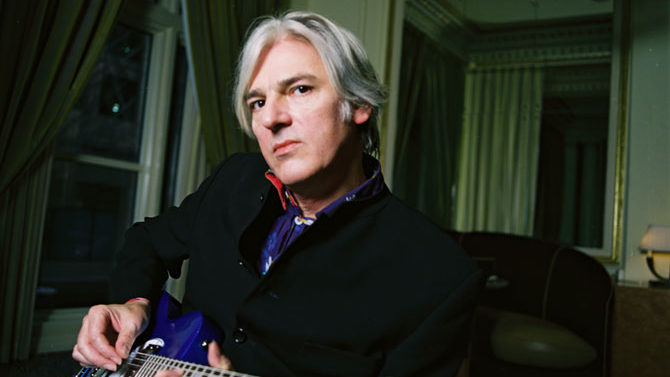 “It just got to me, when I was 13, like nothing had before and not much [has] since,” says Robyn Hitchcock. “It had a unique atmosphere, like entering a haunted house or a room with strange light. It made me feel deeply sad, but it also made me laugh. It helped me become a cynic, and a romantic too.”

In these brief but awed words, Hitchcock, the quintessentially British singer-songwriter who helped to define the guitar-pop form, is going about the business of defining himself. The ecstatic waxing above is in regards to one particular masterwork of songcraft, the song that made him want to write songs of his own.

“I started singing it myself about 40 years ago, and over the last 20 or so I feel like I’ve made it my own,” he says. “But ‘Visions of Johanna’ has also colonized me.”

And so, after Bob Dylan did Hitchcock the favor of spinning him on his head, thus began decades of steady and solid songwriting that continues to this day—first as a straight folk singer in his native Cambridge in 1974; soon after in his perennial punk act The Soft Boys; then as a proper bandleader with Robyn Hitchcock and the Egyptians; and with myriad collaborations since.

Hitchcock’s songs share the dual qualities of pop impatience and abstract allure, the same haunted-house invitation their creator discovered in Dylan so many years ago. For newcomers, there are over two dozen records from which one could choose to begin an exploratory itinerary into Hitchcock’s work. (The aurally widescreen, lyrically self-aware I Often Dream of Trains might be a good place to start.)

For longtime fans, Hitchcock’s return to Athens is a celebratory occasion. Hitchcock has been a close ally of R.E.M. since the 1980s, and he counts Peter Buck as one of his most valued collaborators. In 2006, Hitchcock and Buck officially joined forces as the Venus 3, along with Scott McCaughey (Fresh Young Fellows, The Baseball Project) and Bill Rieflin (Ministry). As such, Hitchcock performances in Athens have become a well-loved tradition.

“In late 1990, R.E.M. had just written ‘Losing My Religion’ and came down to the old 40 Watt as an acoustic trio, minus Bill Berry, to play it one night after I had done a set,” Hitchcock recalls when pressed for a particular Athens memory. “I remember standing at the side of the stage and thinking, ‘Oh no, they’ve lost it. This is terrible.’ It was a stream of minor chords without the drums and mandolin part. It just didn’t grab me at all. I’d been grooving to their uptempo work on Document and Green.

“[Naturally], ‘Losing My Religion’ turned out to be the song that tipped them into global mega-dom. I’m fond of it now. This illustrates more than anything what kind of commercial ear I have. Even my best-known songs are the ones I like the least.”

It’s true: Hitchcock has made the transition from young, would-be punk to silver-haired auteur while maintaining a cult-level fan base, never reaching the kind of star power that would attract fair-weather fans. Like his hero, the aforementioned American folk legend, or his more commonly acknowledged influence, Syd Barrett, hit-making is not his concern now, if it ever was to begin with.

His songwriting continues unabated, an unbreakable habit. “I’ve trained myself to write songs, so I often set my thoughts to music when I’m breathing around the place,” he says. “The flow hasn’t stopped for some time, but the quality varies. Best not to worry about it—it’s not something to be too aware of. I like to think there’s a great song out there waiting for me to write it, that hasn’t already been written by Bob Dylan.”

This nonstop flow of words set to tune has created a world all its own. A particularly lucid illustration of this private planet can be found in Jonathan Demme’s 1998 film Storefront Hitchcock. Free of the performance-art mania of Demme’s most famous concert film, Stop Making Sense, the movie is exactly as advertised: Hitchcock performing for a small audience in a New York storefront window. The songwriter is visible on all sides, gripping the attention and affection of some and ignored by those unaware of the explosive talent behind the glass. In this intimate setting, tired stage tropes disappear. Hitchcock’s fireworks are in his pathos and pith, and for those smart enough to inquire within, it’s more than worth the price of admission.