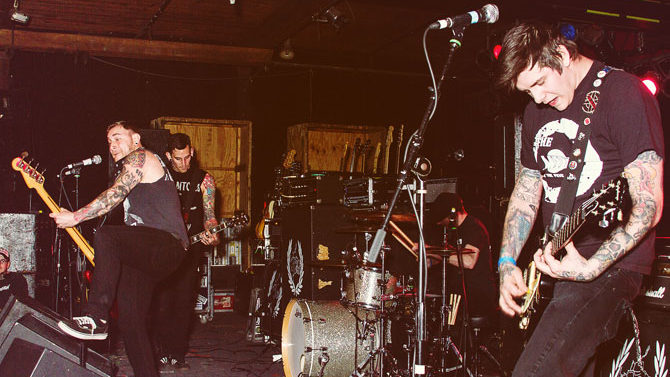 In pretty much any subset of the Athens music scene, there is a band that, through default or design, becomes that grouping’s galvanizing force. For the current Athens pop-punk/hardcore scene, that band is Burns Like Fire. Since starting up three years ago, the group’s four members have tirelessly played, promoted, toured, written and recorded. In other words, they’re behaving like a band should: they’re working.

“We may get even busier,” says guitarist and vocalist Josh Smith. Burns Like Fire has just inked a promotional/digital distribution deal with new artist-development company Autumn and Color, which will release the digital version of the band’s upcoming five-song EP, titled To the Ground. The physical version of the EP will take the form of a split independent release between Burns Like Fire and Atlanta band Seagulls, which also contributes five songs. The smart-alecky title: I’m Too Old for This Split.

Drummer Parker Bradshaw says of the new deal, “[Autumn and Color] is like the new school of indie record labels. It’s more of a partnership. They’re able to help us do things that we can’t do ourselves, like push our music to TV [and] movies.”

Burns Like Fire “hit the ground running,” the group says, in 2010, though it started fomenting plans several months before. Since that time, BLF has recorded one full length record, D.F.L., a single, “King of Satire,” and the Year of the Rat EP.

Except for the time the whole band was arrested in Texas on multiple dubious charges—which led to wildly varying degrees of punishment—and that time it flipped its trailer on Hwy. 316, Burns Like Fire has led a pretty charmed existence thus far. But, as the saying goes, the harder you work the more opportunity you get, and that’s where Burns Like Fire finds itself now. The band has managed to perform on bills with a host of its heroes, including legendary punk acts Bad Religion, Sick of it All, Antiseen and Propagandhi. (To wit, BLF will host an after-party atop the Georgia Theatre’s roof Wednesday after notables Less Than Jake and Anti-Flag play the main stage.)

That’s not to say the group has totally avoided controversy, no matter how unintended it might be. The cover art of D.F.L. depicts a female zombie who is appropriately bloody and wound-riddled—but the underwear-at-knee-level bit feels aggressively gratuitous. Similarly, the artwork for To the Ground features a 1940s-era photograph of two women fighting each other.

Bassist and vocalist Charlie Ferlito says, “[With D.F.L.] we didn’t know how it was gonna look. We asked our buddy who’s in prison to do it, and that’s what he came up with. We’re not misogynists.” And there’s a story behind the EP’s cover and title, he says. “We had a woman come up to us at one of our shows and tell us that she was gonna ‘fuck us [beat us up] to the ground’.”

Guitarist Web Couch weighs in, saying, “We didn’t mean anything offensive. We don’t see it that way. Maybe we’re too dumb to realize it’s offensive.”

Of course, the imagery in question, though potentially disturbing, is also misleading: anyone who knows the Burns Like Fire dudes will readily admit they’re among the most polite and easy-to-work-with musicians in the Classic City.

The band plans to get its new EP out in the next couple of months. To the Ground was recorded across a handful of sessions at Atlanta’s Gresham Park Studios, and there’s an anger and frustration present in the new tunes that seems informed alternately by exhaustion and excitement.

It’s easy to see how the band could feel both. The workload won’t be slowing down any time soon: Burns Like Fire hopes to complete a new full-length album by this time next year, but in the interim, the group will be on the road as much as possible. Still, BLF has exceeded many of its goals already.

“When we started, I had a list of bands I wanted to play shows with,“ says Bradshaw. “And now [having played with so many of them], I have to start making a new list.”

The new relationship with Autumn and Color may help usher the band into arenas it’s not yet entered (festivals, supporting slots on bigger tours, etc.), but there’s not really any doubt that the road hogs in Burns Like Fire will keep spreading their gospel no matter what. They’re a working band, and this is what they do.

WHO: Burns Like Fire
WHERE: Georgia Theatre rooftop
WHEN: Wednesday, Nov. 6, 11 p.m.
HOW MUCH: FREE!