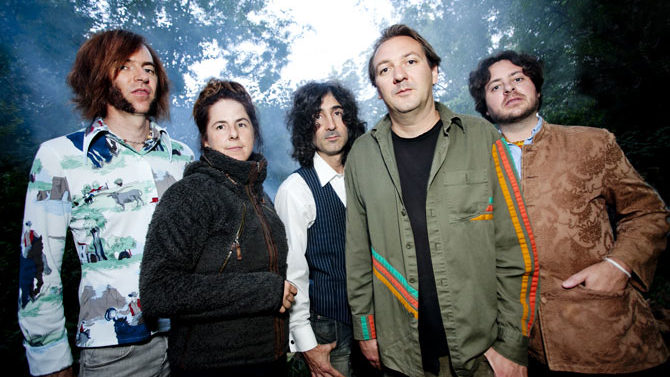 With of Montreal standing as the other notable example, Elf Power is the rare band associated with Athens’ Elephant 6 collective to have remained steadily active since the mid-’90s, releasing album after album of psych-inflected pop. But unlike of Montreal, a group that has reinvented itself seemingly with each release, Elf Power continues to steadfastly explore the same unassuming brand of melted folk-rock it has since the very beginning.

Sunlight on the Moon, the group’s 12th album, out Oct. 1 via Orange Twin, finds the Elves, and specifically frontman Andrew Rieger, in a looser mode than usual. The follow-up to 2010’s self-titled album, which was a restrained, somewhat somber affair dedicated to friend and collaborator Vic Chesnutt, Sunlight sounds like its title: spaced-out, bright and slightly mysterious. In advance of a pre-release show this weekend and a fall tour with Neutral Milk Hotel, Flagpole caught up with Rieger for a chat.

Flagpole: How did Sunlight on the Moon come together?

Andrew Rieger: We worked on it for a little over a year. We recorded some of it out at Gypsy Farm Studio in Lavonia. I befriended Zeke [Sayer], who runs that studio, a couple years ago, because I saw his band The HUMMS play, and I really liked them a lot. He gave me a copy of their album—it sounded great, and he told me he had just recorded it at his home studio. He invited me out to take a tour, and it blew my mind. It’s this derelict amphitheater out in the middle of nowhere, where Dolly Parton and Jerry Lee Lewis and all these famous people performed in the ’70s. And he’s just transformed it into a really neat recording studio. We had a lot of fun recording out there, mostly because the vibe of it was so cool.

And then we did a lot of it with Jesse Mangum at the Glow Studio, as well. He’s got another really cool studio. And some of it we did at my house on my digital 8-track. We would record multiple versions of the songs, and sometimes we liked the songs I had done by myself better than the full-band versions, because it sounded weirder. So it was kind of a trial-and-error process, and it took us a little longer than it normally takes to record an album. But I think the results are really diverse and interesting.

FP: How do you see the album as it relates to the rest of the Elf Power discography?

AR: I think some of the sounds are similar to the earlier stuff—the fuzzier, home-recorded stuff. But at the same time, it’s got more clarity than that. We tried a lot of stuff with drum machines on this album, and combining those with real drums. It was kind of a combination of going back to the super old-school, fuzzy sounds and trying stuff we’d never tried before.

FP: Why do you think Elf Power has managed to have such staying power?

AR: We take breaks. We would tour for a year straight and then we’d get burned out, and take a break where everybody would do their own projects, and then we’d come back together. I think that’s helped a lot, that we’re willing to step away at times and do other things. Plus, we’ve had different members in and out of the band. I’ve been the one constant. Laura [Carter] has been on every album, but she’s sat out on some of the tours. But this time, it’s me and Laura and Bryan [Poole] back in the band—we were the original group—and Jamey [Huggins] has been in of Montreal and a friend of ours for years, so it feels like we’ve got a good, old-school kind of group this time.

FP: How do you see the Elephant 6 legacy impacting Athens music today?

AR: A lot of younger bands, maybe their sound isn’t necessarily influenced by Elephant 6, but they think that what we did was cool, in the same way we did with R.E.M. and Pylon before us. We saw that you could go out and tour and play these little clubs and build it into a bigger thing. Seeing the bands from your area that have done that before makes it seem like more realistic of a goal.

FP: What are you planning for the show this weekend?

AR: We’ve been rehearsing a lot, trying to get ready for the tour with Neutral Milk that’s coming up. We’re gonna play most of the songs off the new record and a ton of old stuff, a couple songs from each of the old albums. And some covers. I think we’re gonna use the show as a testing ground to see what sounds good. [Laughs] We’ll probably play everything we have rehearsed, so I would expect a long set. We’re looking forward to it.

Hear an exclusive song from Sunlight on the Moon over on Homedrone.