Son1 and The Swank Want to Party to the Top 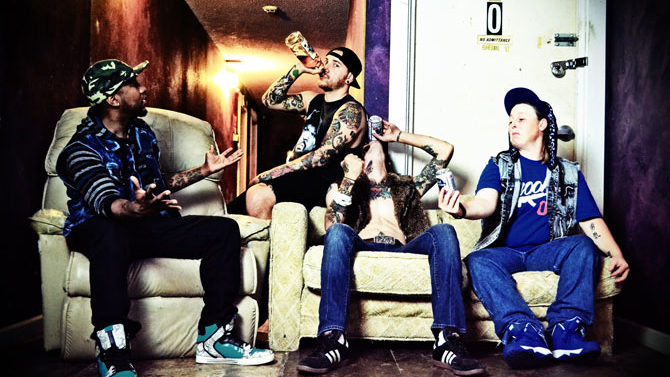 Curtison Jones is through with indie ideals.

“I’ve railed against [the mainstream] for years,” says the frontman of local band The Swank, “but now I’m at the point where it might not be so bad.”

By day, Jones—who is known more widely by his stage name, Son1—works as a title lender. “I have a terrible job,” he says. “I hate it. I screw people over all the time. It’s real stressful. So I live for the weekend. I like to party, and it’s what I write about.”

The band’s current lineup features several stalwarts of the local punk community, including members of Guff and Burns Like Fire. “It’s a little more punk now,” says Son1. “Which is really what was intended.” Meanwhile, the MC, who grew up on a steady diet of hip hop, names groups like N.E.R.D. and Flobots as inspirations for The Swank’s sound. But, he says, the end result is all natural.

“We all have our backgrounds, and that’s where our artistic visions come from,” he says. “So, when you put them together, that’s what happens. We’re definitely not like Limp Bizkit or anything like that.”

Son1’s Athens music journey began several years ago, when he started a “strictly hip hop” project called American Hero. Soon, he incorporated a live band into the show. The rapper, whose former project was more politically minded, says that part of him remains.

“I’m still passionate about politics,” he says. “I’m not a one-dimensional person. But in terms of music, right now, that’s what I’m about. Partying, having a good time.”

The goal of his current project, Son1 explains quite candidly, is twofold: first, to blow off steam—”It’s my stress reliever,” he says—and, second, to carve out a career, one that comes with actual money, in an industry where, by rule, there’s little room for individualism.

Which brings us back to the beginning. There is one Swank song that deviates noticeably from the band’s formula. “Time Machine” is a catchy, if vaguely generic, ballad that explores weighty themes—nostalgia, suicide, broken dreams—complete with a heartfelt falsetto on the chorus. Not coincidentally, it’s the track the group is shopping around to mainstream radio.

“It’s not really a typical Swank song,” Son1 admits, saying the song has begun to garner interest from label execs. “A lot of people want to go the independent route,” he continues, making a face that suggests dissatisfaction. “I don’t want to. I’d rather sign to the major label, and do it big.”

That Son1 is more honest about this desire than most of his contemporaries, at least in the rock scene, signals passion, even necessity, rather than greed. (Of music, “It’s the only thing I’m good at,” he says.) If anything, The Swank is proof that the goals of artistry and success are not mutually exclusive.

In fact, Son1 laments the lack of passion among the local music community, particularly when it comes to hip hop. When he moved to Athens in 2005, MCs like Ishues had begun to put the Classic City on the map. Back then, Son1 says, “People were just passionate about the culture of hip hop. That’s changed. A lot of people are in it now to make some money, and be the next big thing. And when they see it’s not that easy, people just quit.”

Still, he’s optimistic about the way things are headed. Son1 cites the recent Athens Hip Hop Awards as having energized the city’s scene. “Since then,” he says, “I’ve actually seen a lot more people stepping out and working together. It’s kind of looking up right now. It’s just—will it last?”

It’s also worth noting the ways in which hip hop has recently become reincorporated into the local rock scene—for instance, along with The Swank, crossover bands like Jubee and the Morning After have served as a reminder to hipster audiences that, yes, it’s OK to get down.

Because music should be a good time. Shouldn’t it?