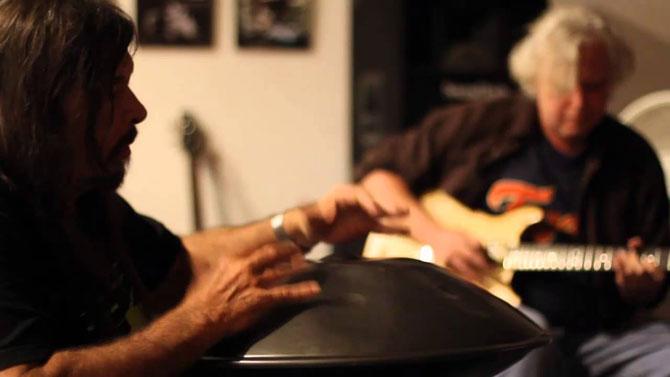 In the liner notes for Live at the 40 Watt: Last Call, the new CD from Brannen & Lieske, there sits a single, simple attribution: “Playing a bad note ain’t a big deal. Playing without passion is.”

Those who knew the owner of the quote might recognize the sentiment and smile. When Craig Lieske, a constant scene presence who played guitar in the bands Garbage Island and Diet Rock Star and was a fixture on the Drive-By Truckers’ road crew, died this past January at the age of 48, he left behind a particular void. Though rock and roll was Lieske’s first language, his commitment to what most people deem “experimental” music was unparalleled by anyone else in town.

It was this appreciation of left-field music that first intrigued Serson Brannen, an Atlanta-based improv artist who has performed for several years under the Subliminator moniker, using voice and electronics to create intense, looping compositions. Brannen recalls his first meeting with Lieske, in Atlanta at the now-defunct Edgewood venue 11:11 Teahouse.

“There was this white-haired guy there that was a really good guitarist,” he says. “I struck up a conversation with him, and within five minutes, we were really, really good friends.”

The two eventually became collaborators. When Lieske set up shop at Flicker last August for a weekly residency, he invited Brannen to perform alongside him. The grizzled, long-haired Atlanta musician arrived with a new toy in hand: the Hang, a steelpan-like percussion instrument developed by two Swiss inventors in 2000 and of which there exist only a handful in the entire world.

Lieske was drawn to the sound of the strange instrument, but also, presumably, its idiosyncratic nature. Either way, the improvised show was a success. (Says Brannen: “It just sort of clicked.”) Energized by the newfound collaboration, the two made plans to travel and record. A brief Southeastern tour, where they played art galleries and other nontraditional venues, was well received. “The response was really, really good,” Brannen recalls.

The new group planned to hit Atlanta’s Studio Z in December 2012 to record a proper album, but scheduling conflicts forced a delay. Though the pair managed to coalesce for a January gig, the rest of that month was no good; Lieske would be on tour with the Truckers. The studio would have to wait. “February third,” Brannen recalls saying. “Lock the date down—we’ll hit Studio Z and knock this out.”

Those sessions would never happen. “February second,” says Brannen, “where is everybody? They’re at the 40 Watt for [Craig’s] memorial service.”

Like everyone else, Brannen was blindsided by Lieske’s sudden passing. “I was stunned,” he says. “Nobody saw this coming.”

Brannen lost not only a friend, but a creative partner. Propelled by the Hang, “we were kind of breaking new ground,” he says. “That was very exciting. Just about any instrument in the world, someone can walk up to you and say, ‘I’ve got a master’s degree in that.’ It didn’t happen with what we were doing, because it was something that hadn’t been done before.”

Desiring to preserve his friend’s memory and to find closure for himself and others, Brannen sought to document what he and Lieske had been working on. Local recording enthusiast Sloan Simpson, who runs the archival website Southern Shelter, had been on hand at the pair’s final 40 Watt gig in January and had gotten a decent field recording of the show. At Studio Z, Brannen and engineer Allen Welty-Green fine-tuned the tape and sent it to Scared Records, the record label run by Atlanta scene vet Stan Satin (Vietnam, The Method Actors). Satin, whom Brannen describes as an “old, old friend,” agreed to put it out.

Lieske’s playing on the three-song Last Call is restrained, for him, even spiritual in nature. The 11-minute “Movement 1” is an airy, circuitous trip, a Hang-centric jam wherein Lieske drops out for large chunks at a time, content to let Brannen’s percussive exploration lead the way.

The second tune, “Monkey Needs Acupuncture,” is a “little goofy piece,” Brannen says, where he sings meditatively of a beach-bum monkey with a drinking problem. Lieske riffs noisily over the song like it’s a bona fide rock and roll hit.

The halfcocked song demonstrates the curious sense of humor that bound the two musicians as much as their shared influences. “Craig had an oddball, kind of goofy sense of humor,” says Brannen. “I talked to him the day before he died, and he was his usual, wisecracking self.”

The disc’s eight-minute finale, “Movement 2,” features Lieske at his improvisational best. Like Crazy Horse on some furtive spirit quest, Lieske’s playing here is psychedelic and emotive, raging but preternaturally controlled. Listening closely, you can almost picture him hunched over his beloved instrument, white mane shaking faintly with each explosive note.

This is the impression left by Craig Lieske’s final recording: underdeveloped though it is, Last Call paints a picture of a man passionate about his work and seemingly contented in some deep-seated creative way.

“We could play, and he would go somewhere, or I’d go somewhere, and together we’d just fall in, right behind,” says Brannen. “It was almost spooky, because we just seemed to know where the other was about to go… We never knew exactly where it was going, but it was always going someplace good.”