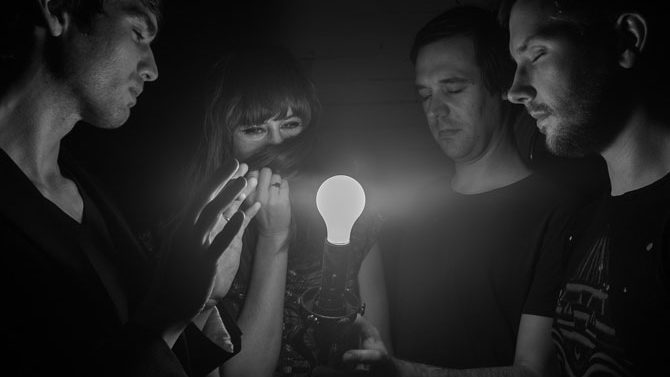 On Tuesday, May 14, local dream-pop outfit pacificUV released its fourth full-length, the dense, engaging After the Dream You Are Awake (read Flagpole‘s review here). The new record comes on the heels of Weekends, the group’s 2012 album, which ended up on more than a few year-end lists, including Flagpole‘s. We sat down with pacificUV frontman Clay Jordan and new bandmember Laura Solomon to discuss the new album, song by song.

Stream the album below and read along:

Flagpole: There was a pretty substantial time gap between Longplay 2 and Weekends. But After the Dream You Are Awake drops only about a year after its predecessor. Does it feel like a particularly fertile period for pacificUV?

Clay Jordan: I am 37, which isn’t that old, really, but in Athens, where it seems like everyone is 22, I feel like an old man being issued his last rites. Couple that with rock music traditionally being a youthful art form, and I do feel a sense of urgency to be more prolific now. My mid-20s were pretty much spent at the Manhattan. If I had spent even half of that time working on music, the pacificUV discography would now be twice as big. Our next record will either be a masterpiece or it will be our last.

CJ: This song is super creepy and told from the point of view of a stalker. At first we only had the chorus (“Hysteria/ Hysteria”) and kind of worked backwards from there, imagining who this term would apply to. I have never written with a character in mind, and it is quite liberating to try on another persona and not feel like you have to express your own feelings in every song. There are some stellar stalker songs out there, like “Every Breath You Take” by The Police and “Climbing Up the Walls” by Radiohead. Not sure “Christine” can be mentioned in the same breath as these, but hopefully it fits in somewhere.

FP: Darkwave-y. Laura, how did you join the fold?

Laura Solomon: I was hanging out with Clay a lot and kept hearing all these demo tracks and started having ideas. Eventually, I woke up one morning with all of the lyrics and melodies for “Wolves Again” in my head, made a demo, gave it to Clay, who gave it to Suny [Lyons], and then they both invited me in to start collaborating.

CJ: I think “Russians” foreshadows the direction that our next record will go: darker, faster, more electronic. I have been threatening for a while now to make an abrasive electronic record (like XTRMNTR by Primal Scream), and now is the time. I have gotten the four-minute electro-pop genre thing out of my system.

FP: Lyrically, this song’s pretty bleak. Or is it?

LS: No question about it, it’s bleak. But it’s another story of awakening and the role dreams play as both purveyors of illusion and revelation. And it’s totally catchy, especially with Billy Idol’s questionable bridge removed.

CJ: I have always loved this song, but the Idol version was always a bit cheesy, with the ’80s production coupled with his pompous croon. I hope our version captures a bit more of the melancholy and wistfulness of the lyrics.

FP: This album seems to veer away from the textural, atmospheric stuff that characterized Weekends and more toward an upbeat direction.

CJ: I kind of see this song as the counterpart of “Christine,” only this time told from the female’s perspective. Talking with women of all ages, it’s kind of astounding how often they get catcalls on the street and ogled by men. For a lot of women, these “wolves” are an incessant problem. Just last week, my friend in New York got harassed by a man who followed her for blocks.

LS: I guess for the reasons Clay cites, and despite its disco beat, I’ve never really thought of “Wolves Again” as upbeat—but maybe I should. It’s definitely an empowering song in which a would-be victim gains momentum and ultimately undergoes spiritual transformation after having taken some hard hits. So, maybe it’s literally an upbeat song? Musically speaking, I’d say we were going for something darkly powerful and pummeling.

FP: As soon as I say that about the album being upbeat, here’s the downeriest of all downer jams. Are you suckers for the sad, slow stuff?

CJ: In our culture, there has been a proliferation of apocalyptic songs, films, etc. in the past few decades. With global warming, wars and the myriad of other horrible things happening now on a daily basis, it seems like our civilization has a collective death wish that we are perhaps close to fulfilling. Freud posited that we all secretly want to die, and the more I experience humans’ tendency to self-destruct, I think he might be right.

FP: What’s the sample around the one-minute mark?

CJ: Laura went out with a microphone and recorded kids as they left school for the day. Loss of innocence is one theme of this record, and I think most people can relate to that elated feeling of leaving work or school for the day. We wanted to create a wistful, nostalgic instrumental that was also a bit menacing and suggested imminent change.

LS: The exact words are “Bye Arthur, have a good weekend, see you Monday. Harswell, stay in line!” I can’t reveal where this was lifted, because I got in trouble with the principal for recording it. Originally, our idea with the samples was to create a portrait of an afternoon, coming home from school and all that, the emotional depth hinging on a paradox: the desire one experiences as a child to run toward adulthood juxtaposed against the nostalgia one often experiences as an adult to run backwards in time. But after we finished editing in Pro Tools, all I could hear was this warning, the car horns, the crickets—everything seemed like an alarm that whispered or screamed “Run, get away from here.” It was two days after the Newtown shootings, and I think without our directly realizing it, we were also meditating on that.

FP: Many things about After the Dream suggest to me that it’s meant to be heard as an album, one of them being that this song, super-poppy and obviously single-worthy as it is, is held until near the end.

LS: Thank you. I definitely hope that people listen to it as an album. It’s meant to be read like a book.

CJ: This is my favorite song on the record and, in my opinion, the most fully realized. We made a very concerted effort to keep the instrumentation minimal so that the nuances of the tone and texture come through. In the past, we would slave over each texture, but once you have 40 tracks on a song, the tone you spent hours perfecting is lost. I like how minimal this song is and that each instrument is clear and resonant. One of the highlights of recording this record was coming back from lunch and hearing the astounding harmony that Suny added to the final chorus.

FP: “In the world you know/ The dream won’t last.” What’s this dream you keep harping about?

LS: It’s actually “In the world you know/ A dream won’t last.” I point this out only because we’re bringing up dreaming in various contexts throughout the album, as delusion from which you’re eventually forced to wake, as a heightened state of consciousness that reveals some existential beauty or a mystery to which you might ordinarily remain oblivious. There’s the past as a dream; the future, too. There’s probably a political implication, a nod to music in general as a dream you participate in for a while, a protest against the specific genre we might get lumped into—and there are inevitably some “life is but a dream” overtones.