Yip Deceiver and the Eternal Groove 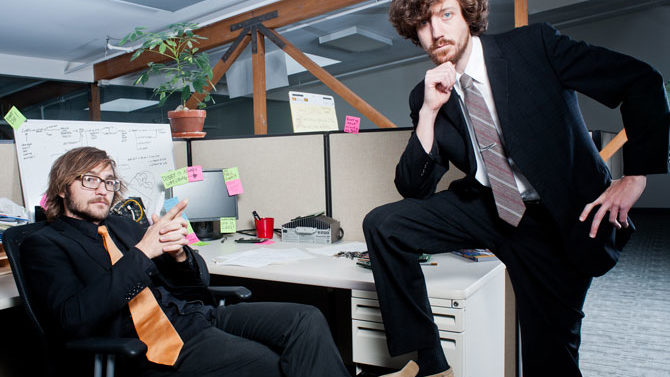 From the moment Bill Berry pounded out the four iconic snare hits that introduce “Radio Free Europe,” the second Pylon started to Gyrate and the weird instant “Rock Lobster” became a thing, Athens has been known as a dance town. The body movement that has swept our city has taken various forms, but its backbeat has persisted for decades. Even now, their rhythmic patter governed by the robotic sounds of trap-happy clubstep phenoms and nighthawk MP3Js, our feet continue to move, still helping us connect.

We incite the music as much as it does us, and as long as there are dancers there will be dancing. For Davey Pierce of Yip Deceiver, a two-man band informed and inspired specifically by the three or so decades of dance music that preceded it, the mere act of performing is the result of this singular passion.

“The only reason we make this style of music is because we actually like dancing. That way, we actually get to get up on stage, dance and sometimes get paid for it,” he says. “We’re not good dancers, but we do enjoy it.”

Though known primarily as an of Montreal offshoot (Pierce plays bass in that band; Yip D’s “accountant/vibes manager” Nicolas “Dobby” Dobbratz is a multi-instrumentalist), Yip Deceiver has grown quickly in stature over the couple years of its existence, and without having even released a full-length album. You may recall the group’s side stage AthFest performance last summer, where an increasingly animate crowd made transit down Hull Street nearly impossible, and where, Pierce recalls, an overzealous sound man jacked up the volume so much it blew the PA.

“I don’t know what it is, but sound guys have a tendency to really like us,” he laughs. “They like to push it, which is good. The weird thing is, we go to these rock clubs and we expect these sound guys who are wearing like, Mastodon t-shirts to hate us, and they just get so into it.”

The crossover success Yip Deceiver has already experienced seems to fly in the face of conventional indie wisdom. Pierce credits his band’s fast-growing popularity both stateside and abroad (the band toured internationally with of Montreal last year; its cheeky, rhythmically dense music does seem uniquely fitted for a Euro audience) to its willingness to abandon rock posturing and just move.

“I think it comes down to the energy,” he says. “There’s a certain kinda undeniable quality to any band that gets up there and actually enjoys what they’re doing.”

Pierce’s lyricism, far from probing, can betray actual human desire; though he maintains that he’s “not that emotional of a person,” songs like “Get Strict” find him straight up yearning. “I need a lover to get me through the haze,” he intones. “I’ll do whatever to get rid of these rainy days.”

Indeed, Yip Deceiver’s music lives and dies by the sort of secretly gutty sophisti-funk made famous by ’80s legends like The Time—Pierce cites that group’s guitarist Jesse Johnson as a prime influence, and it’s not hard to spot the influence of pop showmen like Morris Day in Yip Deceiver’s live show. The band’s debut LP—in the works for months, finally out this summer—finds the dynamic duo exploring even more explicitly the funky-smooth new jack swing of its childhood.

“The new stuff is like, if you could marry Prince and Michael McDonald. We played in Brooklyn, and we played this [new] song… and one of our friends was like, ‘I didn’t know it was possible to actually write songs like that still. I thought you weren’t allowed to do it,'” Pierce laughs. “I’ve always wanted to be able to do that sort of thing. Everything I’ve done before has been rock, or punk or whatever. It’s the only thing that doesn’t bore me right now, honestly.”

What does bore him, he says, is musicians that hand over control to their computers.

“I listen to Skrillex and—well, I don’t listen to Skrillex, but you know, I hear Skrillex—and I’m like, you can’t possibly reproduce this live. I’m sure he’s got a computer and he hits the space bar and it plays. And that’s cool, because he made the composition and now he’s playing it for people. But I like being able to change and things to fuck up.

“When things go wrong,” he continues, “that’s what makes the show really fun.”

Not much has gone wrong for Yip Deceiver thus far, and it would be remiss to overlook the point that the band’s swift rise in the indie music world has, at least in part, been aided by the fact of its members’ membership in one of that world’s most prominent bands. Still, Pierce bristles at the insinuation.

“You know, we play in of Montreal, because we love Kevin [Barnes]; we love his music. But it’s more like that’s our day job—and we’re lucky that we have one of the greatest jobs you can have—but musically, there’s not too much in common. We use synthesizers and they use synthesizers, but other than that, [there’s] not too much.” But, he admits, “it’s hard to distance yourself from something you’re so involved in.”

To pin Yip Deceiver’s past and future success solely on its associations is to ignore its core appeal. People are drawn to the group’s music because they can’t resist the beat, because certain human conduits channel the eternal groove more effectively than others.

“I can’t really stand it when people get up on stage and don’t do anything, or they play music and you’re searching for some way to connect with them,” says Pierce.

Yip Deceiver, like many bands before it, makes it almost too damn easy to connect. Feet to ground, and the beat goes on.

WHO: of Montreal, Yip Deceiver, Linear Downfall
WHERE: 40 Watt Club
WHEN: Friday, March 1
HOW MUCH: $13