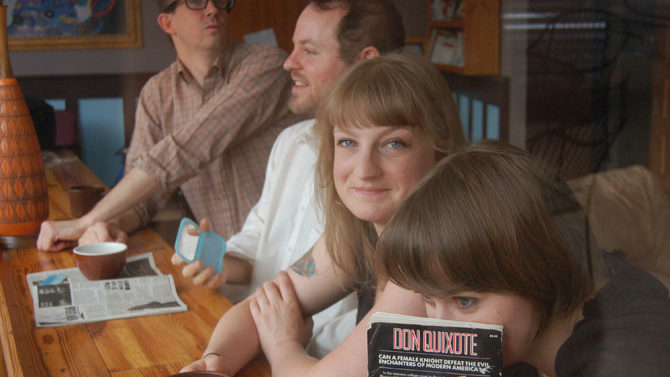 As so often with Tunabunny, it begins with an explosion. Speaking simultaneously on speakerphone, Mary Jane Hassell and Brigette Herron briefly burst into a surprised shriek before dissolving into peals of laughter. A coffee cup has been dropped.

“I wish you could’ve seen it!” says Herron. “It was beautiful!”

It’s an apt beginning to an interview with a band that finds infinite opportunity in the spontaneous. Technically, Tunabunny is a rock band that includes guitarist-vocalists Hassell and Herron, along with bassist Scott Creney and drummer Jesse Stinnard.

“Technically,” because these instrumental and stylistic designations are really only accurate some of the time. Bandmembers are liable to trade responsibilities while recording, step purposefully onto a keyboard onstage and generally move in whatever direction seems the most immediately appealing. Their wandering is not aimless; rather, it moves toward the twin destinations of fun and discovery.

Tunabunny’s aggressive openness goes well beyond the simple question of who’s playing what. The band is on a local twee-pop label, Happy Happy Birthday to Me, but its first release was an 18-minute taffy-pull of sugary, psychedelic pop called “Outer Space Is the Center of the Earth.” It was voted “Best Experimental Band” by Flagpole‘s readership and, shortly after, proceeded to lay waste to the CinÃ©Lab with an AthFest set of propulsive, concise pop songs.

All this may leave the group’s steadily growing audience asking itself: How does Tunabunny decide what Tunabunny will be on any given day?

“It depends on how we’re feeling,” says Herron. “Because it can be very vulnerable going off intoâ€¦ a more chaotic sort of set. But we’re always good about trying to balance that and have some elements of both. Because all four of us, we all have that sort of push and pull, that need to push ourselves beyond our comfort level. But also, we’re sort of perfectionistsâ€¦ And that’s always the Tunabunny quandary, or the trick. Trying to get the right balance, and to face your fears, and to keep going forward and push yourself into scary territory.”

While the songs on the band’s new album, the wryly titled Genius Fatigue, are generally set on a planet of melody and structure, the group’s genesis came from within a world of newness and experimentation. Tunabunny started when Herron and Creney began messing around with an assortment of Herron’s dad’s instruments, following in the footsteps of kindred elders Pylon and The B-52s in their fun-first approach. When Hassell and drummer Chloe Tewksbury joined, Tunabunny became official.

Tewksbury later left the group to focus on Green Thrift Grocery, a wildly idiosyncratic punk band that based its premise largely on “Dr. Who” and a local in-joke. Jesse Stinnard, Tunabunny’s longtime partner in home-recording, was quickly recruited. The difference was immediately felt in their music.

“Stylistically, I think Jesse drives the songs a little more sometimes,” says Hassell. Herron adds, “Jesse’s an amazing songwriter. His band Antlered Auntlord is really great; he’s a really talented musician. Another no-brainer for us was that he wasn’t really a drummer, but we really got along with himâ€”that was more important. We had a lot of the same values. He really fit into our notion of someone we wanted to be in a band with and grow with.”

Genius Fatigue is Tunabunny’s third full-length (following 2011’s much-lauded Minima Moralia) and their first with Stinnard behind the drum kit, as well as the recording equipment. Most of the record was done live, and all of it was done in Herron and Creney’s home.

“We have a living room and then a dining room off to the side, so we put the drums in the dining room, so we could get a little separation that way,” Herron says. “And then we always put a microphone in the bathroom to kind of make an echo chamber. And we just work really cheap and really fast and just try to have a good time.”

A great deal of the process for the new album involved re-contextualized explorations that were recorded and then sculpted.

“We tried to start out really Dionysian, you know what I mean?” says Herron. “Really chaotic, and let the songs come out naturally. And then we impose this sort of Apollonian structure afterwards. We try to get a balance.”

This year, the band reached the five-year mark. To go from ambitious novices to world-touring semi-pros (the band plans to tour the U.K. for the second time next year) in such a short amount of time is a testament to the band’s basis in friendship and trust, rather than hustle and calculation.

“I think we all do a really good job of taking turns taking charge,” says Hassell. “I think that we all have a lot going on, school and jobs, [and] there are times when some of us are more emotionally capable of forging ahead when others are like, ‘I’m tired’ or ‘I can’t really make a decision right now.’ But at the end of the day, we trust each other enough to say, ‘You know what you’re doing.'”