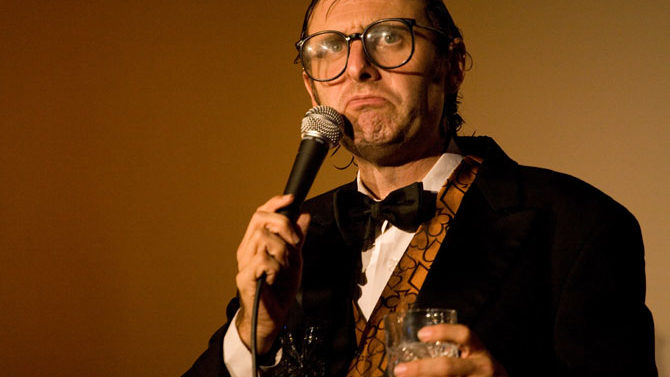 Neil Hamburger (self-described as “America’s Funnyman”) has been making audiences react, one way or another, for over 15 years. With his terrible tuxedo, worse comb-over and a delivery that doesn’t quite exude confidence, Hamburger rarely elicits any audience reaction outside of sheer disgust. He still has a sizable fanbase, and if you attend his 40 Watt performance, you’ll see why. Flagpole caught him in-between shows.

Flagpole: You’re known as one of the hardest-touring comedians out there. Do you still try to perform most nights?

Neil Hamburger: It’s not that I try to, it’s that I have to. Because of the situation involving overwhelming debt, impending bankruptcy, lawsuits, alimonyâ€¦ When you’ve got people breathing down your neck who insist on getting paidâ€”and these guys, a lot of them are pretty convincing about thatâ€”there’s really no choice but to keep working.

NH: Well, I would say that if you’re looking at quantity of hostility, you would have to take the bigger shows that I’ve done. There was one at the Olympic Stadium in Sydney, where you’re talking about, oh, geez, at least 30,000 peopleâ€¦ very hostile, throwing lots of things at the stage, a really unpleasant situation. Whilst the show that I did at Madison Square Garden with Tenacious D, where they were chanting “asshole” at me for the whole half-hour, I mean, that’s pretty hostile. But when you’re looking at it on a personal level, I would have to say the worst shows for hostility are the ones where someone comes up onstage and physically attacks youâ€¦ It’s certainly going to be a memorable evening when somebody smashes something over your head or that type of thing, and police are summoned, and arrests are madeâ€¦ I guess it depends on what you’re looking for. I’ve done shows for two people where they didn’t throw anythingâ€”they just sat at the table with a sour look on their face, basically throwing daggers at me with their eyes. And that can feel like the most hostile crowd you’ve ever had in your life. Surly, unhappy, dissatisfied customers just glaring at you for 45 minutes, that’s awfully unpleasant, I have to say.

FP: You’re as successful as you’ve ever been, at this point. Would you say that’s a fair assessment?

NH: Well, in that we do have audiences at the shows, which is quite nice. But unfortunately, due to a situation I got myself in during the leaner periods, my pay has been garnished by these former management types and some of the unscrupulous booking people I used to deal with, and certain attorneys and certain ex-wives. Basically, the more that I make, the more that they make, so I’m on a very restrictive salaryâ€¦ barely above sustenance level. I could play quite a big venue and it could seem like a triumph, but it’s only a triumph to those who I owe money to.

FP: But even beyond the financial aspect, you’re as well known as you’ve ever been, you’re on television, etc. So much of your act is based on poking fun at celebrities. And I was wondering if you’ve ever had the misfortune of running into the celebrities that you’ve mocked in your act?

NH: Well, I haven’t been on television in several years, but thanks for saying that. Yes, I did run into Mr. Dane Cook at a bar. He surprised me by coming up and speaking with me. I had no idea that he was thereâ€¦ He was very cordial, and expressed his sadness that I felt this way about himâ€¦ And that’s a little sad, because he was a nice guy. But we will still do the jokes. I mean, you’ve gotta keep the act moving. And getting laughs from the folks that paid their good money to be entertained that evening, and they expect nothing more than the jokes they paid to hear, delivered in a style that can help them forget their problemsâ€¦ Because a lot of it is people with problems trying to get away from their problems for the night, and just laugh their fool heads off and have some fun. I mean, that’s why you go out on the town, am I correct?

NH: And that’s what we’re trying to supply. I do apologize [to] some of the celebrities, but honestly, what’s their fuckin’ problem? I mean, these guys can hear me make fun of them in front of 75 people for $1.50 and then they can go back to their mansions and have caviar on toast and count their bags of money that they have to rent an extra room in the mansion just to storeâ€¦ What does it matter if I go on a stage and say they look like a fraud? What’s the problem there? I’d be happy to be called names all day long if it would mean that I would have a room full of cash at home. So, I think these people need to fuck themselves if they can’t take a gag like that.

FP: How do you know Todd Barry?

NH: We met in line at a Walgreens many years ago, and stayed in touch. It was a very slow cashier, and it was kind of a traumatic situation in which a line that should have taken, you know, three or four minutes to get through ended up taking 20 or 30â€¦ So, all of us in this line stayed in touch over the yearsâ€”cards and lettersâ€”then it moved into the digital age with emails and that sort of thing, and we have a reunion every once in a while and talk about the incident. And so when Todd and I both realized we were in a similar line of work, it made sense to pair up and bring what we feel is the best variety evening of entertainment on the market todayâ€¦ which is exactly where we’ve brought this act, and always to great acclaimâ€¦ We feel that this is a very solid night out.

Read the rest of our interview with Neil Hamburger over on Homedrone.