Quiet Is the New Loud 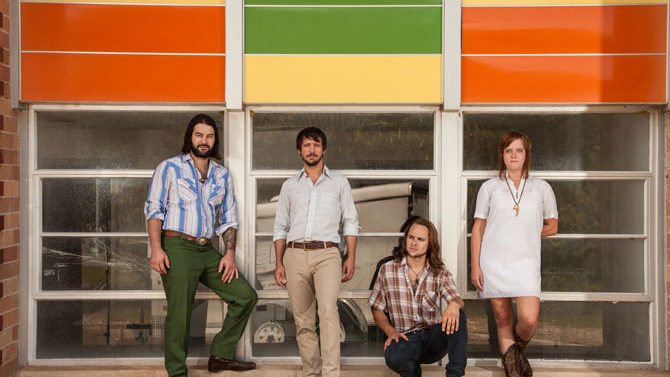 Loud goes a long wayâ€”ask anyone who lives on Pulaski Street during an outdoor gig downtown. But sometimes, quiet goes further. When you aren’t blasting people out of the room, when you throw a blanket on the drums, when you aren’t going acoustic but it almost sounds like you areâ€”that’s when you reverse the magnetic field and start drawing people in, not pushing them out.

Andre Ducote gets that, in a big way. After shredding the night fantastic as the guitarist for Athens-area metal band The Knife Trade (lyrical themes, as listed on the website Encyclopaedia Metallum, include “suffering, hate, death, hell”), Ducote made the conscious decision to turn down.

And so his new quartet seeks to create space rather than fill it. “It helps. You get the subtlety of what we’re doing,” says vocalist Ashley Floyd. “It draws people in. It lends more dynamics [when] it’s quieter.”

In forgoing the ego-blasting of competing amp volumes, Boycycle passes the value on to the listener. Subtlety is present in all sorts of places on the quartet’s new album, The Steady Confident Touch of a Man in His Prime, which will officially be released at the band’s Flicker show this Friday. Synthesizers, banjo and Floyd’s exploratory voice are the album’s most prominent elements, interweaving with the supremely inventive rhythm section of Bryson Blumenstock on drums, mostly, and Austin Williams on bassâ€”again, mostly. (Bandmembers often switch out instruments during their performances.)

While all of the band’s musicians are experienced, they intentionally utilize new tools in Boycycle, to charmingly tentative effect. “We’re able to learn new instruments as we play together,” says Floyd. “It keeps it kinda fresh.”

Electronics bubble throughout the band’s new album, though the songs are always bolstered by either a solid-but-understated beat or a dynamic hook. Both of these elements are present on the album’s best track, “Morning Sun,” which marries a head-nodding rhythm to a knockout vocal melody courtesy of Floyd.

Her voice must be discussed independently from the band for a moment: many singers seek to emulate BjÃ¶rk’s searching, meandering confidence, Sade’s ghostly otherliness or Sinead O’Connor’s level of commitment, but Floyd actually earns these comparisons. She is not the member of the band with the ‘least worst’ voice, designated by defaultâ€”she is a true singer.

Her vocals integrate perfectly with the rest of Boycycle, which is somewhat surprising, given that she was actually the final addition to the group. In early 2011, Blumenstock, Williams and Ducote were working out material without a vocalist.

“To start with, when [we] didn’t have a vocalist, I was more worried about the possibility that we’d have to be an instrumental band,” Ducote says. “So, I’d carry a lot more melody on the synth and the banjo part. When we got Ashley, I learned that I could write simpler stuff and not have to worry about covering as much melody, since she [could] do that. I could kinda kick back and do rhythm and simple melodies.”

“It was neat how it started out, ’cause it meant that I could do whatever I wanted, you know?” says Floyd. “It has room to breathe.” To listeners delving into Boycycle’s new album, it might feel like there’s even a bit more room left; that spot, it seems, has been reserved for them.

Stop whatever you’re doing and listen to Bill Doss’ music