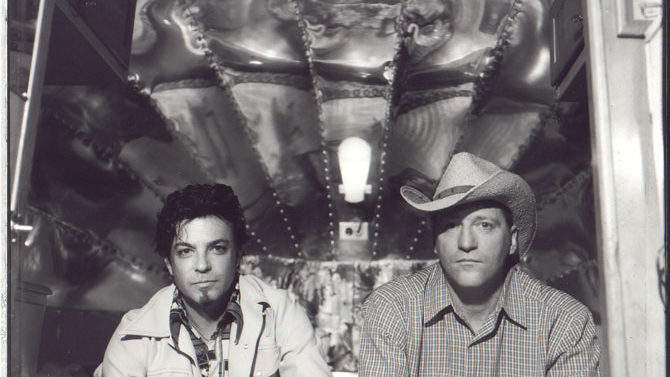 A brief history: Camper Van Beethoven formed in 1983, garnering some commercial success along the way. The band split in 1990, and soon thereafter vocalist/guitarist/songwriter David Lowery formed the band Cracker. Camper reunited in â€˜99, and since then, Loweryâ€™s two bands have sporadically played bills together.

According to Lowery, the upcoming three-day Camp-In is something of a “family reunion” for the bands and the fans. He also hopes the series of shows will serve as an in-depth exploration of the artistsâ€™ careers.

â€œWe call our thing a â€˜fanfest,â€™â€ says Lowery, â€œbecause we dive down into the Cracker and Camper oeuvre. We first show people how these bands are relatedâ€”why Camper sounds like this and Cracker sounds like thatâ€”and sort of break it apart into its components and then put it all back together. I think every band has to be understood in its own environment.â€

While Lowery insists that his songs donâ€™t necessarily have â€œsomething to say,â€ he does point to a common lyrical theme shared by both bands.

Many younger folks were likely introduced to Camper Van Beethoven through the documentary Bowling for Columbine, which featured the CVB song â€œTake the Skinheads Bowling.â€ The track comes across as humorously nonsensical. However, the song essentially makes a statement by saying nothing, satirizing the overly serious artistic climate of the early 1980s.

â€œThe song doesnâ€™t mean anything other than â€˜take the skinheads bowling,â€™â€ says Lowery. â€œIt has absolutely no depth to itâ€¦ Every time you thought it was going to mean something, the next line would follow and not really lead anywhereâ€¦ We wrote that song in 1983, when all the other bands really seemed to have something to say.â€ In a sense, CVB fought bullshit with bullshit.

Lowery has often used his unique, tongue-in-cheek humor as a storytelling device, insisting that you don’t have to be serious to share a serious story. “You can use tools like irony, humor, absurdity,” he says. “People are often like, â€˜Oh, this band is whackyâ€™â€¦ but thatâ€™s not really the way our fans understand us.â€

He points to writers like Thomas Pynchon and Kurt Vonnegut as influences. Although “they are regarded as serious writers,” says Lowery, “they didnâ€™t just write in this dreary, matter-of-fact prose.â€ Musically, both Cracker and Camper are wildly and proudly eclectic. â€œCamper and Cracker have always taken a little of this and a little of that and mixed it with rock music,” says Lowery. “The difference between the bands is that theyâ€™re choosing different thises and thats.â€

But from where does this eclecticism come? Lowery provides a historical explanation: â€œBoth the bands formed in this area of Southern California that was known as ‘The Inland Empire.’ People in L.A. talk about The Inland Empire in sort of the same way that people in New York talk about New Jersey. [The Inland Empire] is sort of the land of big hair, rednecks, immigrantsâ€”itâ€™s not a very nice term. But what theyâ€™re getting at is also what influenced our musicâ€¦ itâ€™s this weird melting potâ€”almost a melting pot of misfits and undesirablesâ€”that was its reputation. So, in a lot of ways, Camper Van Beethoven and Cracker grew up with this polyglot of American culture all mixed together. And a lot of the bands that came from The Inland Empire reflected that in their musicâ€¦ Thatâ€™s how I think we found that eclecticism thatâ€™s part of our milieuâ€¦ Itâ€™s almost like we didnâ€™t have home-grown culture, so we mixed all the stuff together.â€

Last year, Lowery became a lecturer for UGAâ€™s Music Business program. Since he seldom has the chance to speak about the nature of the business as a mere artist, Lowery is excited to â€œhave the university under [his] name,â€ which enables him to emphasize the unpredictability and hypocrisy of the business.

â€œA lot of my success and a lot of my peersâ€™ success always seemed to be driven by a lot of luck, weird flukes or random things that just happened,â€ he says. â€œEverybody in the music business talks as if theyâ€™re â€˜highly skilledâ€™â€”as if the things they do matter more than they actually do. Part of my mission is to point out that weâ€™re all kind of full of shit.â€

Can we get an amen?