Five Acts I Loved at SXSW 2018, Even Though I Was Sick as Hell

I spent last week in Austin, TX seeing as many bands as I could in an attempt to gain valuable content for Flagpole Music’s Instagram account. Just a few days into my trip, I contracted an intense infection that would push my body to its limits and turn SXSW’s already somewhat stressful environment into an Eraserhead-like nightmare. Here are five acts that I saw while sick that I still managed to love.

It was my second night in Austin when I first started to feel ill. While walking to see Pale Waves, a glam quartet out of Manchester, I felt an unusual amount of exhaustion. I wasn’t sure if I was sick yet, but I did make an executive decision to stop consuming alcohol. Dressed in goth-chic clothes and with smeared makeup, Pale Waves share a lot in common sonically and aesthetically with their labelmates and mentors The 1975. Their set at the BBC’s “British Music Embassy” showcase was slick as hell, with synthy, melodramatic pop songs that would feel at home in any John Hughes movie.

Lead singer Heather-Baron Gracie has a stunning and pristine voice, the kind of voice that sounds even better live than it does on record. Across a lot of their performances this weekend, it was not uncommon to see screaming teenage fans in the front row singing along to songs like “New Year” and “There’s a Honey” with tears streaming down their face. There were plenty of too-cool adults in the crowd as well (including me), surely crying on the inside.

Just one day later, I was sure I was sick. My throat was on fire, one of my tonsils felt like it had quadrupled in size, and my skin was switching from burning hot to ice cold at a moment’s notice. When I entered Empire to see Australian pop artist G-Flip, I found an unattended plate of tater tots. After waiting 15 minutes, I decided no one was returning for the cold, soggy tots, and I ate them in shame. The tots made me feel worse almost immediately. Then, in an odd bit of karma, a stranger offered me a hot, fresh plate of tots that they had just bought, and I had to turn it down.

After this disappointing turn of events, I headed inside to see G-Flip. She opened her set by diminishing expectations. She had just played her first show as a solo artist the day before; her two other bandmates had just met each other this week; she had to struggle to piece enough material to even have a live set in time for the festival. Despite all this, G-Flip (full name Georgia Flipo) churned out a set of Billboard-ready hits to a packed crowd like it was nothing. A session drummer turned solo bedroom-pop artist, Flipo performed to smiling family members in the front row and already-adoring fans in the rest of the house. Some of her unreleased material was admittedly sloppy but showed real promise, suggesting that once they’re on record they’ll be something really special.

The shining star of the set was the single “About You,” G-Flip’s only released material to date. This song is an absolute powerhouse that had crowds singing along like they’ve known it their whole lives, despite it only being released just a few months ago. It easily has the potential to become one of the most popular pop songs of 2018 once it inevitably hits mainstream radio.

As I entered the advanced stages of a fever, I managed to stumble into Topshelf Records’ showcase at Cheer Up Charlie’s. Days earlier, when I was in better health, I had decided I would spend the entire night there enjoying tacos and taking in the sounds of various bands from one of my favorite labels. Before Montreal emo band Gulfer took the stage, I ate two delicious “white trash tacos” from Tacobaby. A combo of chicken, bacon and ranch was smeared across my lips as I took my place front and center at the edge of Cheer Up Charlie’s inside stage. I watched the band at an uncomfortably close distance, sometimes headbanging but mostly just trying to keep myself standing up.

Gulfer’s set was excellent, a tight 30-minute performance packed to the brim with shout-along choruses and extended instrumental math-rock excursions. Their sophomore LP Dog Bless was just released at the beginning of March, and their live presentation makes a good argument for it as a possible album-of-the-year contender. I was so worn out after their set that I made the difficult decision to head back to my campsite early. 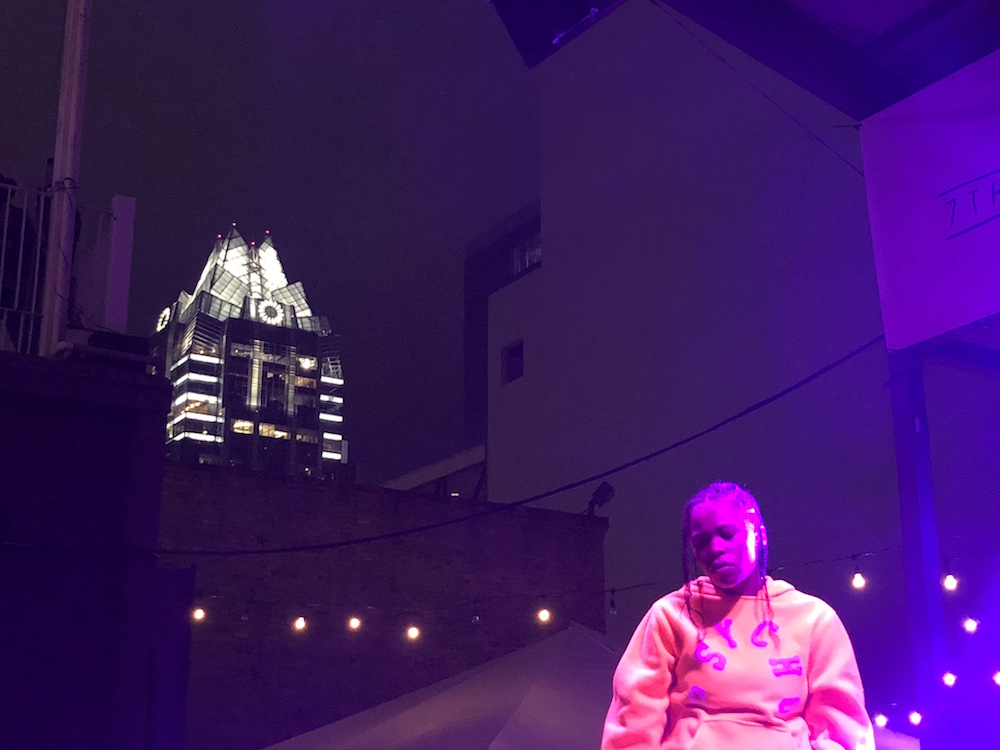 I stumbled across town on my way to the bus stop, and just before I reached my destination I noticed a sign outside of The Belmont advertising an all-female hip-hop and R&B show. I already felt like I was abandoning my post by going home early, so I walked in and found a pole to prop myself up against for at least one act. Atlanta Rapper Kodie Shane is the only female member of Lil Yachty’s Sailing Team collective, and based on her performance at this showcase, she has the potential to outshine all her teammates considerably. Shane has all the bubbly-sweet production and auto-tuned crooning that Yachty has become well-known for, but she also has a level of pure and undeniable lyrical skill that they can’t touch.

Tracks like “Indecisive” and “Runway” showcase Shane’s ability to write and sing a solid pop hook and back it up with memorable bars and a versatile flow. When all is said and done and The Sailing Team is no more, it wouldn’t be surprising to see Shane standing tall above her contemporaries and eventually eclipsing Yachty as one of Atlanta’s biggest success stories.

On my last day of seeing performances, I made the trek to the Moody Theater in order to see a brief but energetic set from California hip-hop four piece SOB X RBE. The Moody is huge, with a maximum capacity of almost 3,000, so I was able to find a seat way up in the rafters where I could watch the set and blow my nose without disturbing anyone.

SOB X RBE first started gaining a lot of traction with the release of their self-titled mixtape in 2017. However, 2018 has marked their true mainstream arrival, with the one-two punch of their excellent new mixtape Gangin and a high-profile placement of their song “Paramedic” on the Black Panther soundtrack. While indie darlings Brockhampton have taken up the mantle of bringing back the boy band in hip-hop form, I’d argue that SOB X RBE’s pure chemistry and skill makes them the N*SYNC to Brockhampton’s LFO.

While enjoying their set, I also partook in a free sample of something called “Legal Lean” that was being passed out at the front of the venue. It tasted like codeine-free cough syrup to me, but its placebo effect was enough to bring a brief taste of relief to my feverish musical hell week.