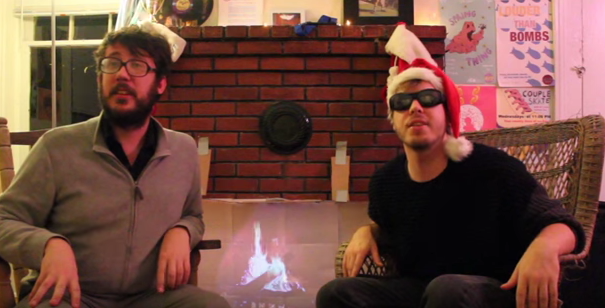 Forget A Very Murray Christmas: This year’s No. 1 all-star holiday special comes courtesy of Athens jokesters Sad Dads, who have previously filmed themselves eating a buch of raw onions and whose music Flagpole‘s usually unflappable Gordon Lamb has gone on record saying he “can’t muster the patience or stomach to deal with.”

On New Year’s Eve, the Dads released the 34-minute Sad Dads Holiday Special via YouTube. (Yes, perhaps fittingly, the band’s holiday special came out after the holidays were basically over.) From the video’s description:

Join Athens superstars Sad Dads in a holiday special unlike anything you’ve ever seen! Thomas and Cameron await patiently at the house for the rest of the band to show up for the holiday shoot, but will they ever arrive? Will Robbie and CJ be ok on the treachorous [sic] roads? Will Santa be naughty or nice this year? All these answers, along with musical numbers, guest appearances, and hilarious hijinks await you during this Holiday Special!

If you’re suffering from holiday-season withdrawal, you can watch the zany clip below.

Patterson Hood’s Plea to Save His Old House from Developers