Patterson Hood’s Plea to Save His Old House from Developers 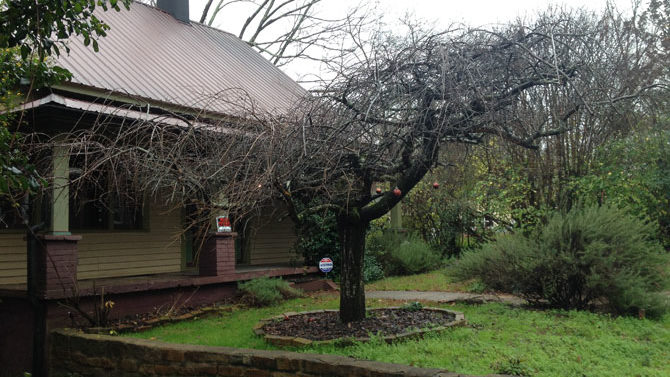 Drive-By Truckers frontman Patterson Hood made a public plea this morning for student housing developers Landmark Properties to extend the deadline for his old house to be saved.

The Hoods, who moved to Portland, OR last year, sold their East Broad Street property to Landmark with the understanding that the house could be moved to the Elephant 6 collective’s Orange Twin compound in northeastern Clarke County. The deadline to move the house passed at midnight.

As expected, the house could not be moved because rainy weather the past few weeks made the ground too wet for heavy equipment. E6’s Laura Carter said Monday that she asked Landmark for an extension to Jan. 22, but the company did not agree to it.

“It is sad for us, but we hope the house gets a good move later by someone who will value its history and love it, when the Pottery Street block goes commercial,” Carter said.

Landmark CEO Wes Rogers would not say what he plans to do with the Hoods’ former house or land. The Athens-based company has been assembling properties bordered by Pottery Street and the future rail-trail, across the tracks from another Landmark development, The Mark, that is under construction and across East Broad from several other student apartment buildings. Presumably, at some point the century-old house will be demolished and the block, which is zoned for high density, will become more student housing.

Here’s the text of Patterson Hood’s email to Landmark executives, which he copied to dozens of Athens-Clarke County officials, as well as members of the media and others.

Happy New Year to you both and everyone cc’d here. We hope that each of you have enjoyed the holiday season with the ones you love most!

It is with great hope that we are respectfully asking you both, who we understand have the ultimate power over all decisions within your company, to get behind the moving of our former, but very special, and very old home to the Orange Twin property. Maybe with so many other much more important and pressing matters for Landmark needing your time and attention that you haven’t fully realized what is even happening in regards to your newly acquired property and what is surely a relatively minor case for your company?

We are asking that you show your support of the moving of the house by granting Orange Twin an inclement weather extension in order to get the house moved, safely and with NO liability to Landmark.

When we were first approached about selling the house, we said, and have always said at every point since, that the top priority for us is the preservation of this house that my wife and I have renovated and lovingly restored and protected for the last sixteen years. The house is of historical significance as well as a deeply personal one. It has been our family home for the raising of our children and the lives we have built together. Getting the house moved was the intention and basis for agreeing to sell our property in the first place. We have stated this as our utmost concern at every point in the process ever since you first came to us nearly a year ago.

Rebecca and I couldn’t be more thrilled at the possibility of seeing our house end up on the Orange Twin Conservation Community’s land and we hope that you will see that this is what is in the best interest for the house to preserve and continue its history.

Laura Carter and the other shareholders of Orange Twin were ready to meet and turn in all of your requirements weeks ago and then the rains came. The rains made the ground way too soft for the house to be safely moved by the Jan. 5th deadline. It became too risky for them to go forward with turning in the rest of the requirements, as they would have incurred further costs, without the strong possibility of the house getting safely moved over to their land. Without your company granting an extension it just could not happen. The rain appears to be drying up and Laura feels like if she was given more time w/ a stretch of sunny days that she could get the house safely moved and leave the property as promised in our Post Closing Agreement.

So it is with these factors in mind that we find ourselves in the position of begging you to honor what Landmark knew to be our priority from the very beginning. We hope that you both will find it in your hearts to grant Orange Twin this inclement weather extension. This has the potential be a win / win situation where you become the hero for enabling a wonderful non-profit [501(c)3] to use and save our hundred plus year old house. Starting off the new year with an act benefitting the long term betterment of our wonderful artistic community that has done so much to make Athens a world renowned destination.

Athens Power Rankings for the Week of Jan. 4