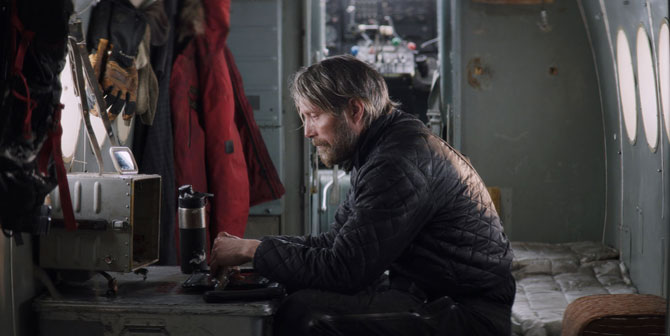 Mads Mikkelsen, television’s eternal Hannibal Lecter, dominates the snowy landscape as Overgard, a pilot stranded in the Arctic tundra. When his rescue efforts lead to a helicopter crash that leaves an injured young woman in his care, he decides to trek across the vast, white nothing in search of something. Before getting saddled with another human being, Overgard had a pretty good routine of fishing, tending to his SOS, hand-cranking an emergency locator beacon and contemplating his frostbitten toes and fingers. Leaving his makeshift shelter opens up all kinds of new dangers, like fighting off a polar bear.

Making his feature debut, director Joe Penna has constructed an impressively stark film with a narrative as barren as its Icelandic location. Mikkelsen is the film’s obvious draw. Not only does he have the silent strength and contemplative resourcefulness that never casts doubt upon his will to survive, even when the odds get unrealistically grim, he can also carry a near dialogue-less film on his own. Just make sure your parents, who are sure to be super-stoked for this movie after the one preview they saw, do not mistake it for Mads’ decidedly hard-R Netflix release with the unfortunately similar title of Polar.