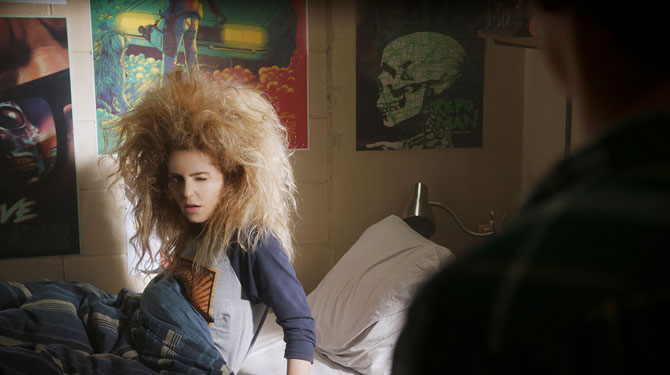 Apparently, director Christopher Landon—yes, the son of Michael Landon—failed to understand what made writer Scott Lobdell’s slasher-flick-meets-Groundhog Day work. For the sequel, Happy Death Day 2U, comic-book veteran Lobdell is out, making Landon—who has been writing the Paranormal Activity franchise since No. 2—a hyphenate. Landon seems to think Happy Death Day’s strongest suit was its comedy, as opposed to a combination of horror and comedy. If anything, his nearly horror-less sequel is more sci-fi comedy—it even goes so far as to set up the potential for an even larger franchise.

Landon’s bright idea for Happy Death Day 2U is arguably the worst thing that can happen to such a gimmicky flick: He attempts to explain it. What he devises is a time-loop multiverse idea straight out of DC Comics. Remember Tree Gelman (Jessica Rothe), the sorority girl being repeatedly murdered by a killer in a baby mask on her birthday? Now, do you remember her love interest, Carter (Israel Broussard)? Almost there. Do you remember Carter’s roommate, Ryan (Phi Vu)? Apparently, he is a science student whose thesis project involves time manipulation, and it was somehow triggered to start Tree’s original time loop. (The mystery surrounding how Ryan’s device was triggered seems like an interesting narrative path, but it remains a road not taken.) What a buzzkill.

Instead of seeing someone else murdered over and over again on a different day, Happy Death Day 2U goes back to the past again, but this time Tree humorously (?) kills herself, rather than waiting for the killer to off her. To use an analogy Carter and Ryan would appreciate, it pulls a bait-and-switch like Back to the Future Part II, where we are only in the future for a short while before the rest of the movie reenacts the first.

Happy Death Day 2U is a charming sendup of ’80s sci-fi comedies—think Weird Science or Real Genius—selling itself on a horror reputation. Rothe made a delightful scream queen, and her allure transfers to the disproportionately comedic sequel. It is not that Happy Death Day 2U is unsuccessful—it has merely been misrepresented. The filmmakers amusingly accomplish their intentions, which just did not include as much (any?) horror as the original or its inspirations. Viewers should expect more Groundhog Day and less Happy Death Day.