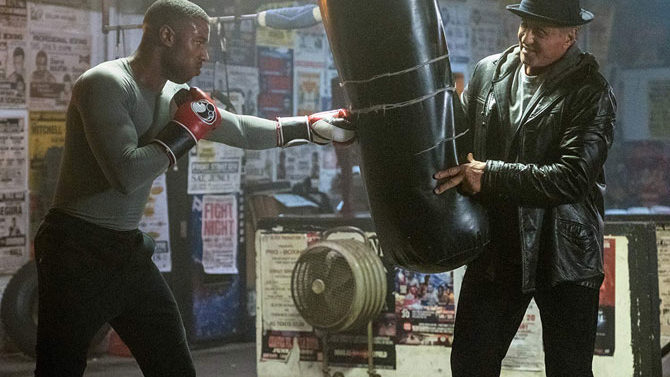 Bad Rocky movies are a lot harder to make than one would think. OK, Rocky V remains the unanimous candidate for worst entry in the storied franchise, but boxing is the perfect sport for sequels—there’s always a rematch. In 2015, Ryan Coogler smartly rebooted boxing’s cinematic heavyweight champion in a film good enough to stand side by side with the 1976 Oscar winner. The loss of Coogler’s guidance created apprehension about Creed II, but the return of Sylvester Stallone as a screenwriter imbues it with such a strong sense of franchise history, its success is virtually ensured. This movie is every inch an eighth Rocky as it is a second Creed.

Thirty-three years after Ivan Drago (Dolph Lundgren) killed Apollo Creed in the ring, his son Adonis (Michael B. Jordan) is now the champion, and before the celebratory champagne can go flat, a sleazy promoter (Russell Hornsby) issues a challenge to fight Viktor Drago (Florian “Big Nasty” Munteanu). Rocky (Stallone) wants none of a revenge match he sees as unnecessary. (After several training montages, he settled that score in a Russian ring.) Without his mentor’s blessing, Adonis accepts the bout. As early in the movie as this first bout occurs, one familiar with the Rocky formula can easily surmise what is bound to happen: more training montages, more boxing, more family drama.

With Creed II, Stallone and a bevy of other writers truncate the character arc of Rocky II–IV, which is much more complete than one may remember. One of the film’s cleverer moves is its humanization of the once-inhuman Soviet boxer Drago. No one thought twice about how that loss to Rocky would have ruined his life and how those dashed dreams might affect his progeny. The movie’s most obvious misstep is how little of an individual person Viktor is allowed to be. Munteanu may be a physical specimen, but must not be much of an actor. Viktor’s release would be more dynamic if he uttered more than a line or two.

While the film belongs to Jordan, who becomes a more complete movie star with each featured role, Stallone is still the king of this ring. It is doubtful any actor knows a character as deeply as he knows Rocky. Every movement and every word is faultless. Creed II may not be as perfect as its stars or precursor, but it is every inch a Rocky movie—i.e., a winner.