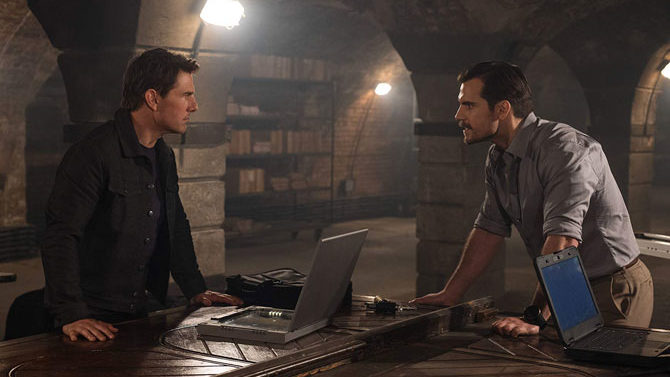 The Mission: Impossible franchise has become one of the strongest exemplars of disposable big-screen entertainment. Each entry is as intensely yet briefly enthralling as its star, Tom Cruise. Like me, you may find the movies undeniably entertaining, yet so lightweight as to make no lasting memories. Did Cruise jump out of an airplane in the fourth one or the fifth? Wait a second; am I remembering a scene from Mission: Impossible or a Fast and the Furious sequel?

For the first time in the franchise, you have to know your Ghost Protocol from your Rogue Nation as the events of Fallout, aka M:I6, are steeped in repercussions going as far back as 2006’s Mission: Impossible III. Did you remember that Cruise’s Ethan Hunt had a wife named Julia (Michelle Monaghan)? Even if you don’t, do not worry; your enjoyment of M:I6 will not be affected, just how much you understand before Hunt’s longtime pal, Luther Stickell (Ving Rhames), catches you and disavowed British agent Ilsa Faust (Rebecca Ferguson) up on Hunt’s cinematic past.

While searching for three lost plutonium cores, Hunt and his team—which now includes an infamously mustachioed Henry Cavill—uncover a new terrorist threat that has teamed up with Rogue Nation’s baddie, Syndicate leader Solomon Lane (Sean Harris). Writer-director Christopher McQuarrie does nothing revolutionary, but he has mastered the exact sort of action favored by his adrenaline-junkie patron/star. The relentlessly intense Fallout will excite everyone but avowed Cruise haters (which was so chic in 2005).