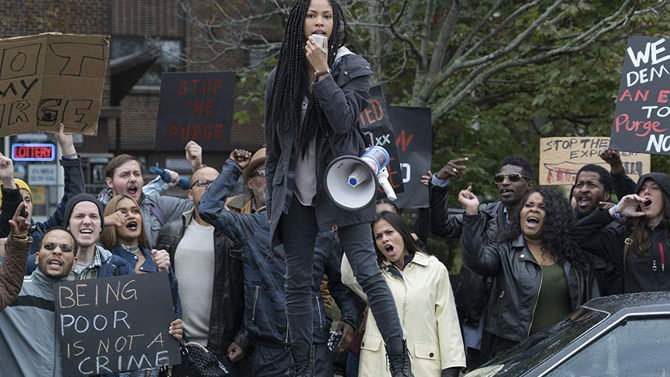 Separated by merely a week in terms of release dates, The First Purge and Sicario: Day of the Soldado could not be more opposite in terms of ideology. Where Taylor Sheridan seemed to write Sicario using presidential tweets, James DeMonaco goes full George A. Romero with his politically charged Purge prequel. Yet, where Romero had Tom Savini cover his social subtext in zombie makeup, DeMonaco and director Gerard McMurray—a newcomer to the franchise—do little to hide the threads tying this tale of government-sanctioned murder based solely on socioeconomic status and skin color to the current administration.

At least Thanos had the decency to depopulate the universe at random; the New Founding Fathers of America simply want to get rid of poor people so mandatory government spending will decrease. That the movie elevates the island’s resident villain, drug kingpin Dmitri (Y’lan Noel of HBO’s “Insecure”), simply strengthens its ties to Blaxploitation over horror.

Its political polemics are the only new ideas expressed by this fourth Purge. Everything else—the violence, the masks, the plot progression—is kind of samey, which may bode ill for USA’s upcoming televised “Purge.”