Ant-Man and the Wasp Review 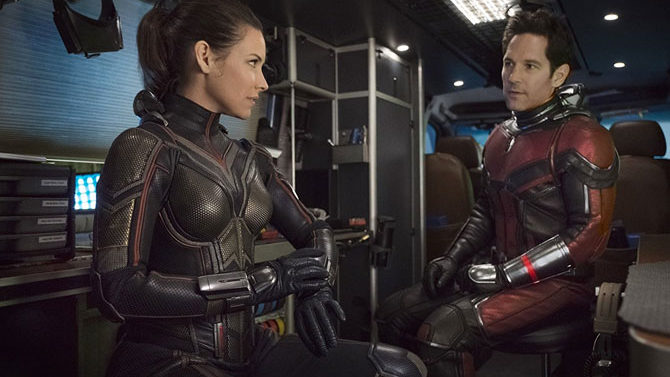 In 2015, Ant-Man pleasantly shut down Phase Two of the Marvel Cinematic Universe. Paul Rudd’s take on the not-always yet mostly diminutive superhero was fun, did not take itself too seriously and was needed to bridge the darker Avengers sequel, Age of Ultron, with an even more dire Captain America sequel, Civil War (does anyone else wish they had just titled it Marvel Civil War?). Now, here comes Ant-Man and the Wasp to brighten up the aftermath left by Avengers: Infinity War, the single most devastating point in the decade-old MCU.

Anyone who saw Infinity War knows Rudd’s Ant-Man, Scott Lang, was absent due to his house arrest following his role in Civil War’s battle at the Berlin airport. Ant-Man and the Wasp opens in the final days of Scott’s two-year incarceration. Per the terms of his forced staycation, the former criminal turned costumed hero has not had any contact with Hank Pym (Michael Douglas), or his daughter, Hope Van Dyne (Evangeline Lilly), or their supercool tech. However, Hank and Hope have been dabbling in the quantum realm trying to save their respective wife and mother, Janet (Michelle Pfeiffer). Due to his sojourn to the quantum realm in the climax of the first movie, Scott seems to have a connection to Janet that might lead to her eventual rescue. Or so Hank and Hope hope, until a sleazy black-market tech dealer (Walton Goggins) and a mysterious masked phase-shifter get in the way.

Fortunately, Scott is still in business with his former partner in crime, Luis (Michael Peña), who comes through in a pinch, constantly nailing punchline after punchline. Still, Ant-Man’s real superpower is the charm of Rudd, who pulls off dazzling physical comedy, as well a terrific bit of classic body-swapping. His portrayal of the enormous love the estranged Janet Van Dyne possesses for her family is as convincing as Pfeiffer’s, but way funnier.

As the MCU has expanded to explore its more humorous corners in the two volumes of Guardians of the Galaxy and Thor: Ragnarok—a sincere contender for 2017’s funniest film—Ant-Man, which initially cast itself as the funny Marvel movie, has etched out a singular spot for itself thanks to its small stakes and big heart. The familial bonds of the Ant-Man heroes—be it Hank and Hope or Scott and his daughter, Cassie (Abby Ryder Fortson)—grant these two movies the biggest heart in the MCU. Scott is not saving the world; he is saving himself so he can be a good dad for Cassie. Stakes may get bigger; they do not get more personal.­

Do not read that last sentence and think ­Ant-Man and the Wasp forgets it is a superhero movie. In their second outing, director Peyton Reed and his new quintet of screenwriters—which again includes star Rudd—utilize the shrinking powers of their dual heroes with much more confidence. The action choreography of each size-shifting battle is both crisp and creative. The shrinking of vehicles even freshens up the grand old car chase through the hills of San Francisco into something that seems more new than it is. Even the cinematic G-Man, so often a grim-faced curmudgeon, gets a funny facelift from Randall Park (“Veep” and/or “Fresh Off the Boat,” depending on your viewing habits). Not every baddie is out to destroy the world—nay, the universe—and it is nice to have a small-timer like Ant-Man to turn to when the odds are not that grim but the day needs saving all the same.