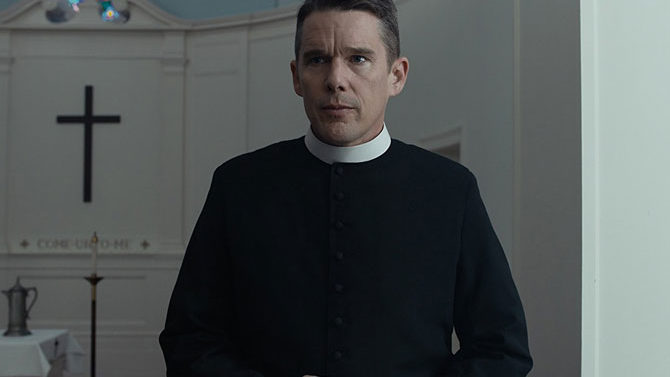 Despite popular notions, conservatism does not have a monopoly on patriotism or faith. Filmmaker Paul Schrader delivers one of his more potent cinematic sermons in this liberal look at subjects more often addressed in artistically deficient faith-based movies. Ethan Hawke adds another influential figure to American fiction in Rev. Toller, the leader of a small church in upstate New York that is more museum than vigorous bride of Christ. After counseling a despondent, young, radical environmentalist (Philip Ettinger) at the behest of his pregnant wife, Mary (Amanda Seyfried), Toller’s despondent eyes are opened to even more despair.

First Reformed is no summer pick-me-up, but we pretty much have one of those opening in theaters each week. Instead, it will challenge the viewer to ask questions and confront some ugly truths about the current state of our world, both corporeal and heavenly. The film also requires one to engage almost exclusively with Hawke—an unarguably talented actor who can be difficult to engage with—for two hours. In First Reformed, like last year’s Maudie, he is as irascibly fascinating as ever. First Reformed less reflects the Schrader-Scorsese collaboration Taxi Driver than it does the doubt and impulses of their underrated adaptation of The Last Temptation of Christ.