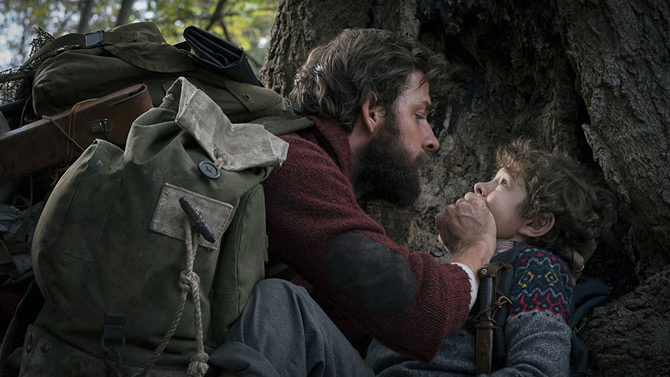 A Quiet Place is not just the best horror film released in 2018 so far, it is the best film so far. John Krasinski, better known to everyone as Jim Halpert from “The Office,” really upped his filmmaking game from 2016’s family dramedy The Hollars for this high-concept horror flick. Yes, A Quiet Place is set in another post-apocalypse, but this one is not plagued by zombies, thankfully. Instead, it is razor-like creatures that slice and dice anything as soon they hear it. As a result, the world, and the movie, are nearly dialogue-free. Silence has long been an effective weapon of horror filmmakers (Bryan Bertino wielded it capably in The Strangers), and it may never be as terrifying as in A Quiet Place.

The Abbott family, headed by Krasinski and his real-life wife, Emily Blunt, bravely navigate this new world with their children, including a deaf teenage daughter, Regan (Millicent Simmonds, the young star of Wonderstruck). Blunt’s Evelyn is pregnant and nearly due. The family has made every preparation possible for bringing an infant into a world where its every single cry means instantaneous death. Krasinski and his co-writers have crafted a rather extreme parable of parenthood. If you thought it was hard keeping your kids safe in reality, throw in extremely dangerous creatures that hunt by sound.

The world of A Quiet Place is not one in which humanity can survive long-term; it will be nearly impossible for most youngsters to reach an age at which they can actually understand why they cannot make a sound. Some of its pieces of interior logic remain unclear even to its end, but the sheer intensity of the experience drowns out any momentary queries. The horror hot streak continues for another year.