A Wrinkle in Time Review 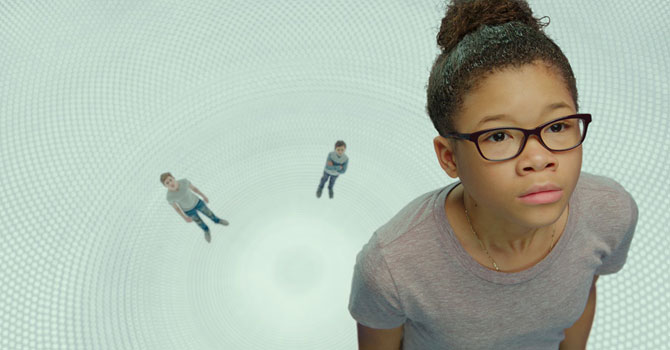 A Wrinkle in Time should not be this difficult a film to review. It should either be a diverse, family crowd-pleaser destined to be a modern classic or a crass, over-stylized mess like Disney’s billion-dollar bore, Alice in Wonderland.

I did not expect adapting Madeleine L’Engle’s classic of childhood fantasy would be easy. Jennifer Lee, the successful scripter of animated fare like Frozen and Zootopia, took over Jeff Stockwell’s script and movie-ized L’Engle’s multi-planet journey where needed; the setup and conflict in the final act is better on screen than on page. Selma director Ava DuVernay has structured some lovely sequences, many visually mind-blowing, and Storm Reid (12 Years a Slave and the sadly overlooked Sleight) successfully navigates the difficult role of Meg Murry—whom L’Engle wrote to not be the most pleasant protagonist—like a more veteran actor.

Yet the whole of A Wrinkle in Time never quite gels. The diversity of the film’s cast ensures it will not be just another forgettable YA adaptation. However, some character-actor combos are more perfect than others, and more often than not the failing may be in the difficulty of adapting L’Engle’s unconventional creations. Oprah Winfrey has the proper gravity to lead the three Mrs. W’s, but both Reese Witherspoon and Mindy Kaling are more odd than appealing. Even the incredibly likable Chris Pine cannot help Dr. Alex Murry earn a Lit’s Best Dad mug. Zach Galifianakis almost gets a pass due to his unfortunate casting as the Happy Medium. Michael Peña improves on the man with red eyes.

Flaws and all, A Wrinkle in Time conveys a message of inclusivity, so essential for today’s youth (and their parents). Here’s hoping it becomes the rule, not the exception, for blockbusters to come.