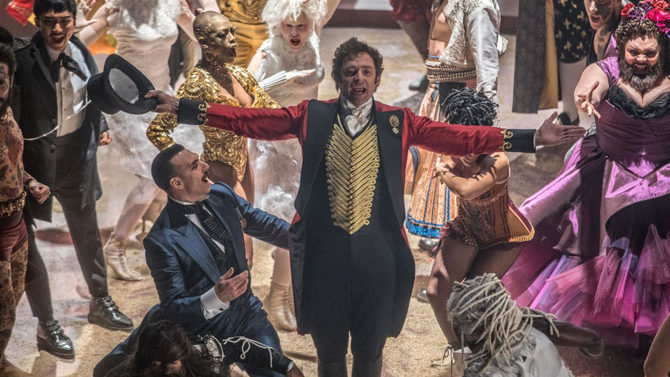 Few movies wear their earnestness as brazenly as The Greatest Showman, a throwback to the heyday of the cinematic musical not only in form and function but also in character. P.T. Barnum probably never said, “There’s a sucker born every minute,” but this historically questionable, musically contagious biographical drama will suck moviegoers in for all 105 minutes.

Hugh Jackman seems born to play the famed showman; his unique combination of acting, singing and dancing chops captivate, even when Barnum is letting us and his family, both immediate and circus, down. (Imagine if Jackman and Baz Luhrmann were to team up for a musical with a little more artistic fearlessness; oh, had Australia just had some lyrics written to be sung over choreographed cattle drives!) Good as Jackman is, he is nearly matched by Zac Efron, who smartly keeps his anachronistic super-physique hidden while wooing Zendaya’s trapeze artist.

Ignore the artistic license taken by writers Jenny Bicks and Hollywood’s go-to musical man Bill Condon—especially regarding the Barnum-produced American tour of Swedish Nightingale Jenny Lind (Rebecca Ferguson, whose robust radiance cannot be ignored)—and focus on the infectious songs by La La Land lyricists Benj Pasek and Justin Paul. Though “This Is Me,” impressively performed in the film by Keala Settle’s bearded lady, was the only song to grab an Oscar nomination, nearly all of them are equally catchy, if a bit too generically modern.

That it’s too generically modern—or not timeless enough—may be The Greatest Showman’s biggest long-term obstacle to joining, if not the all-time greats, the all-time just-rights.