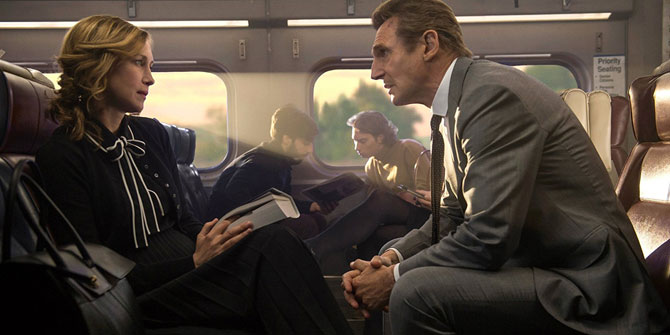 The Commuter may be a victim of the magnificence of its own opening. A slice of the commuting life of Michael McCauley (Liam Neeson) is an excellent short film that could win awards were it not connected to the larger thriller pitting Neeson’s former cop-turned-insurance man against a nebulous organization of evildoers.

Director Jaume Collet-Serra’s fourth collaboration with action figure Neeson is the best yet; the plot is tauter than Non-Stop, and the character more sympathetic than in Unknown and Run All Night. Neeson is nearing the ageless wonder stage of Harrison Ford, where questioning the plausibility of a 65-year-old beating the tar out of all comers becomes sillier than the action.

The Commuter may ultimately be as predictable as its protagonist’s morning routine—casting known actors signifies either a suspect or a red herring—however, reaching the end of this line is far more entertaining than really riding a commuter train. No shame should be felt in enjoying a top-notch Hitchcockian thriller like this flick.