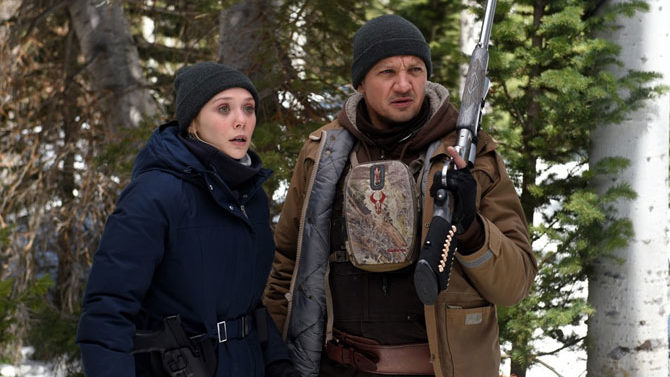 Taylor Sheridan, who used to be best known as Deputy Chief David Hale before he was brutally run down on “Sons of Anarchy,” blew up as a screenwriter after the script for the tense, labyrinthine Sicario, even snagging an Oscar nomination for Hell or High Water. Now, Sheridan makes his directorial debut with Wind River, which is definitely cut from the same cloth as his previous scripts.

A body of a teenage girl is found on Native American land by a U.S. Fish and Wildlife tracker, Cory Lambert (Jeremy Renner). The FBI are called and send in Jane Banner (Elizabeth Olsen) to determine whether or not the girl’s death was a homicide, which would allow the agency to swoop in and investigate. Banner enlists Lambert’s tracking skills to find the killer, a matter that is more personally complicated by Lambert’s mysterious loss of his teenage daughter, who was best friends with the victim.

Sheridan does not give himself as many threads to unravel as he did in Sicario, which probably benefits him as a first-time director. Wind River manages to satisfyingly solve its central mystery and adequately resolve some major issues for its main characters. The film feels like the swell first adaptation of a mystery series following Lambert and Banner as they solve crimes in the wilds of Wyoming, a foreign land of trucks and snow. Renner, whose immense gravity had seemed to shrink since the one-two punch of The Hurt Locker and The Town, is tremendous; his performance is minimal and humanistic and does not strike a false note. The actor seemed to have been swallowed by the star; he finally re-emerges through some powerhouse quiet emoting. In what feels more like an audition for Clarice Starling, Olsen proves she would make a pretty good Clarice.

In Wind River, Sheridan finds the poetry in a sad crime occurring in a harsh environment that feels like another country or even another world—Wyoming might as well be The Empire Strikes Back’s Hoth. Hopefully, this talented filmmaker has not set the bar too high for him to clear it with his next script or feature.