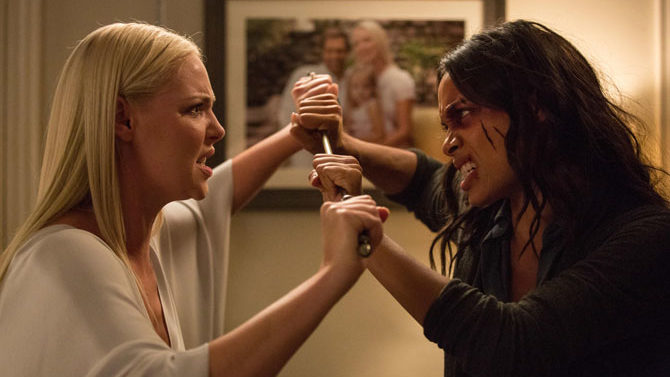 It’s not as if you haven’t seen this movie before: Two women—one sane, one not so much—fight over one man. Rosario Dawson stars as Julia Banks, who is recently engaged to David Connover (Geoff Stults, as magnetically wooden as ever), but Katherine Heigl is the main draw as his ex-wife, Tessa, who loses whatever tenuous grasp on reality she may have had at their engagement.

The eight-year-old (that fact alone is unbelievable!) Obsessed, with its wicked blend of Beyonce, Ali Larter and Idris Elba, may have been more tawdry fun, but what passes for an “erotic” thriller these days has a modicum of appeal thanks to Heigl, who plays the campy, crazed villainy as straight as her blond hair. In her directorial debut, mega-producer Denise Di Novi (Tim Burton classics Edward Scissorhands, The Nightmare Before Christmas and Ed Wood) may not have found a second career, but she may have found a second life for Heigl’s career. The former “Grey’s Anatomy” star should give thought to specializing in these sorts of genre flicks; she is much more appealing at being unappealing.