The Lost City of Z Review 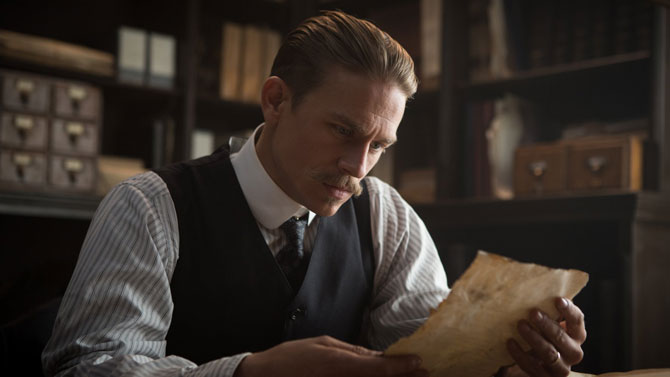 James Gray’s films (Little Odessa, The Yards, We Own the Night, Two Lovers) typically have a reliable, one-time watchability while lacking the central appeal required for multiple viewings. The Lost City of Z fits that description quite well. The film, based on David Grann’s bestseller, recounts Colonel Percival “Percy” Fawcett’s obsession with discovering a lost civilization in the Amazonian wilds. He made several trips, including the ill-fated final one upon which he disappeared, to the same river near the border of Bolivia and Brazil to find the city he dubbed Z (his critics derisively said he sought El Dorado, or some other such mythical city of gold).

In Gray’s well-meaning but methodically paced exploration of Fawcett’s obsession, Charlie Hunnam (“Sons of Anarchy”) plays the British explorer with the proper amount of stiff upper lip and controlled hubris. What starts as a map-making expedition at the behest of the Royal Geographical Society becomes a survival quest into a land actively trying to kill him. Hunnam has both the gravitas of an early 20th Century British soldier and the magnetism to engage viewers for nearly two and a half hours. As Fawcett’s constant companion, Henry Costin, Robert Pattinson is near unrecognizable beneath a bushy beard, which probably does more to separate him from Twihards seeking more Edward Cullen than anything. Recognizing Ian “Emperor Palpatine” McDiarmid in a rare non-Star Wars appearance is just an added treat.

Excursions, however brief, into other, non-exploratory aspects of Fawcett’s life, like World War I, slow down an already deliberate film. Fortunately, each of the three Fawcett expeditions depicted increase in intrigue and, often, danger. As shot by Darius Khondji, these unexplored lands are as gorgeous as they are deadly. But so is the pacing established by Gray; many audience members may get as lost as Fawcett.