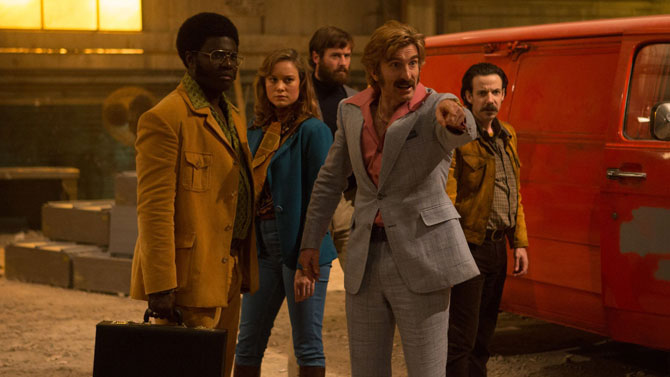 In this period bullet-fest set in 1978 Boston, British filmmaker Ben Wheatley—who turned in what many horror fans consider one of the finest genre entries of the decade, Kill List, and the well-received High-Rise (his A Field in England is only recommended for the most stalwart of fans)—has his most accessible and widely released film.

Two gangs meet in a deserted warehouse to complete an arms deal. IRA soldiers Chris (Cillian Murphy) and Frank (Michael Smiley) are meeting nutty arms dealer Vernon (Sharlto Copley) to purchase machine guns. The deal, facilitated by intermediary representatives Justine (Brie Larson) and Ord (a bushy-bearded Armie Hammer), is going fine, if not smoothly, when trouble breaks out between the muscle brought by the two groups. It seems Stevo (Sam Riley, aka Ian Curtis in Control) has a brief but bad history with Harry (Jack Reynor, who was memorable in last year’s terrific Sing Street). Gunfire breaks out, and just about everyone gets hit as the bullets continue to fly.

In Free Fire, Wheatley cribs from the Guy Ritchie playbook of bullets and flippant dialogue delivered in oft-incomprehensible accents. That statement is meant to supply more shorthand descriptor than insult; once upon a time, it was cool to like Ritchie. Additionally, Wheatley’s film lacks any of the former Mr. Madonna’s trendy, hubristic flaws. Wheatley simply aims for a pulpy bull’s eye and hits it with every projectile in his well-stocked magazine. The laughs whiz by as fast and furious as the slugs. Hammer seems to be particularly entertained by his own antics, and Copley is ever the king of crazy.

If there is a moral to be found in Free Fire, it seems to be not to work with armed incompetents. Or maybe it is to not arm incompetents. Either way, everyone ends up bullet-riddled.