The Fate of the Furious Review 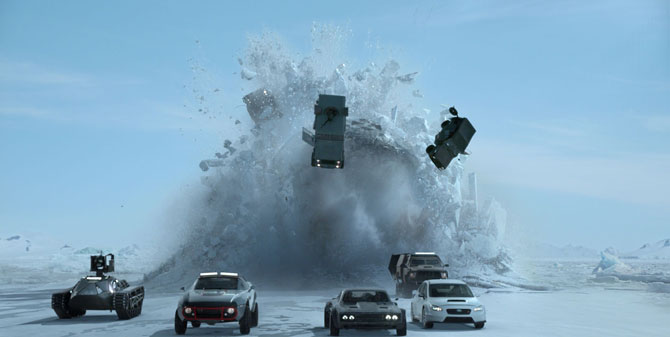 In its eighth installment, The Fast and the Furious franchise has not slowed down. Instead, it keeps revving to more and more preposterous heights. And the more ridiculous it gets, the more sublime an experience watching a new one becomes. Essentially under the creative watch of Vin Diesel, whose role as star and producer seems to allow him to steer Dom and Family wherever he wants them to go, F&F has gone from a surprising box office hit of a gearhead heist movie to the greatest adaptation of an ‘80s cartoon that never was. Every shot of the collective vehicles chosen by the movie’s main characters resembles the end of every commercial shilling merchandise during my childhood. “Collect ‘em all,” it seems to shout. Yet the movie is not a weak family friendly adaptation of Transformers, though it may be the better G.I. Joe movie made by the Rock.

Fate, or F8 (get it?), begins with Vin Diesel’s Dominic Toretto enjoying the good life in Cuba with his new wife, Letty (Michelle Rodriguez). The Spirit of Cuba and Dom of the people may be a bit much, but cyberterrorist Cipher (Charlize Theron) shows up to ruin the honeymoon with undisclosed threats to Dom. Soon, Hobbs (Dwayne Johnson) is embroiled in a federal prison riot involving Deckard Shaw (Jason Statham). Mr. Nobody (Kurt Russell) and his protégé, Little Nobody (Scott “Son of Clint” Eastwood), enlist the remaining Family—Letty, Roman (Tyrese Gibson), Tej (Chris “Ludacris” Bridges), and new recruit, Ramsey (Nathalie Emmanuel)—to capture their rogue patriarch. Somehow this plan winds up in a chase with a nuclear submarine in the Arctic. What!? Then the movie gets really crazy, and Jason Statham spends an entire fight with a baby in a car seat.

It has been a while since these guys were clearly human, but Diesel’s Dom does cry real human tears at one point! The rest of the movie is ludicrous action sequences that elicit a perma-grin. F8 may be the most cartoonishly brutal Furious entry, but it is also a nicely well balanced ensemble pic. Dom and Letty get their moment. The Rock’s Hobbs and Statham’s Deckard Shaw make a nicely combative couple. Roman, Tej and Ramsey complete an enjoyable triangle, even if Roman is fully engaged in comic relief mode. Yet intriguingly Diesel’s Dom barely interacts with anyone save his newly betrothed. Guess that might be an aftereffect of the whole Diesel-Rock feud. Or maybe he just does not like Roman. Who knows?

Fresh off his hit, Straight Outta Compton, F. Gary Gray handles his first Furious installment like an expert driver. His camera is a bit too frenetic during an early fight, but everything in a vehicle is handled with aplomb. I also wish Theron had been more Joan Crawford–entertainingly psycho like in Snow White and the Huntsman, but the Furious franchise is not a world in which actors, outside of Kurt Russell, chew much scenery. Paul Walker remains sorely missed; he was almost the only other actor in the series with whom Diesel interacted. But the series can easily continue on without him, so long as it favors earnestness over condescension. All the globetrotting shenanigans can still be wrapped up by a climactic backyard cookout, with Dom all sun’s out, guns out. Some will inevitably accuse this entry of being the one in which Fast and the Furious jumps the shark (Statham and the baby, in particular), but I enjoyed the entire affair with a dumb grin and cannot wait for Furious 9, no matter the silly name it is given.