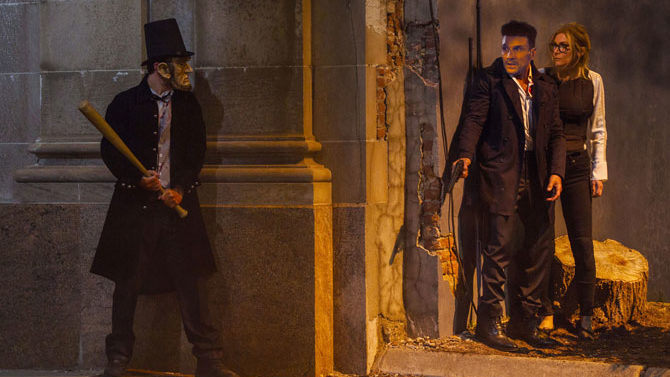 Another year, another Purge, and like the first sequel, The Purge: Election Year bests the first movie by simply dropping viewers in the middle of this annual rite of murder and the American way. On the eve of the latest event, Senator Charlie Roan (Elizabeth Mitchell), a Purge survivor and presidential hopeful running on a platform to purge the Purge, is under the protection of the former cop from Purge: Anarchy, Leo Barnes (Frank Grillo).

As with the previous franchise entry, other everymen—deli owner Joe Dixon (Mykelti Williamson), his employee Marcos (Joseph Julian Soria) and anti-Purge EMT Laney (Betty Gabriel)—are also prepping for these terrible 12 hours. When the ruling party, the New Founding Fathers of America (NFFA), decide Roan is an actual political threat, they send an army of white supremacists to kill her. On the run, Barnes and Roan meet up with Joe, Marcos and Laney and try to survive the night.

The Purge: Election Year is the most allegorically ambitious entry from writer-director James DeMonaco. Still, that ambition is The Purge’s biggest problem. As audience members, are we supposed to cheer the violence or denounce this awful example of class warfare?