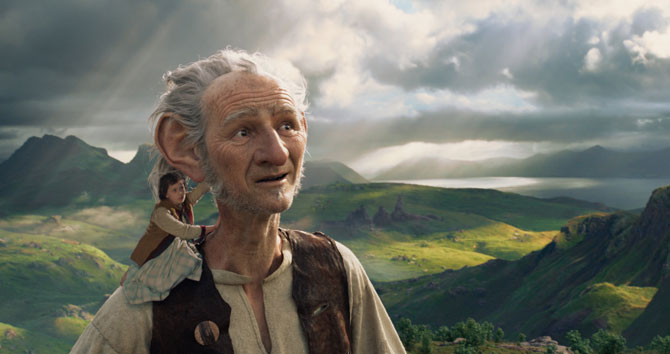 Steven Spielberg, whose last family film was 2011’s The Adventures of Tintin, brings Roald Dahl’s popular book to the big screen with the mostly successful results expected from the film titan. Dahl works from the boilerplate of children’s literature with this tale of an orphan, Sophie, who befriends a runt of a giant she calls BFG (Big Friendly Giant).

Unfortunately, the rest of the super-sized denizens of Giant Country are much bigger, way less friendly and cannibals; Jemaine Clement of Flight of the Conchords stands out as the worst of the giants, Fleshlumpeater. After an interminable middle sequence where BFG and Sophie hunt dreams, the duo hatches a plot to get rid of the other giants with the help of the Queen of England (Penelope Wilton, Isobel Crawley of “Downton Abbey”).

The CGI of The BFG is hit or miss. Newly minted Academy Award winner Mark Rylance gives the king of motion-capture, Andy Serkis, a run for his money with an animated performance worthy of award consideration. Rylance conveys a depth of character through his voice, facial expressions and throwaway gestures that’s rarely if ever seen via motion-capture performance. Then the film disconnects due to the poor FX used to place Sophie in BFG’s hands and extra-large world. How the most subtle CGI can be partnered with what appears to be decades-old computer FX in a film from the director who oversaw Jurassic Park is unfathomable.

When the FX challenges are combined with an event-less second act that forces the enjoyable, action-filled third act to be rushed—the film clocks in at an already too long two hours—The BFG loses some of its magic. A note of sadness also accompanies this sweet children’s film, as it is the final work of screenwriter Melissa Mathison, the former wife of Harrison Ford best known for writing E.T., who died in 2015.