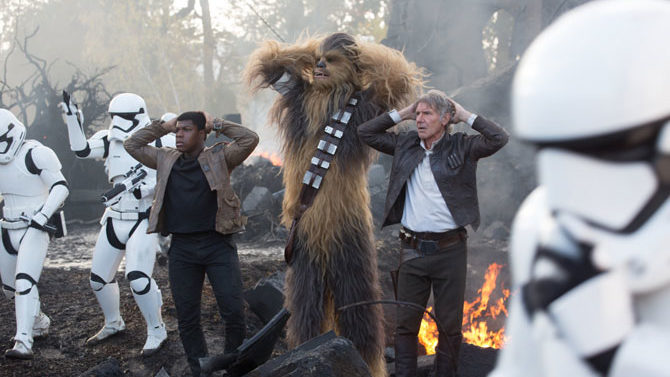 Right at this exact moment, in this very galaxy, the nearly 40-year-old cultural phenomenon that is Star Wars rolls on. Universe architect George Lucas has ceded control of his billion-dollar property to Disney, who tapped Star Trek reinvigorator J.J. Abrams to construct the first film of the franchise to be set after the original trilogy, and it completely validates my generation’s collective childhood.

While The Force Awakens is not quite the post-Return of the Jedi movie we always wanted—the further adventures of Luke Skywalker, Han Solo and Princess Leia—it is the perfect franchise palate-cleanser after the increasingly poorly-aging prequels. The Force Awakens will never unseat the original trilogy (it will never rank higher than fourth), but it is the most complete film outside of The Empire Strikes Back.

After the disappointingly written and directed prequels—flaws directly attributable to Lucas himself—Star Wars needed what The Force Awakens provides. Sighting the Millennium Falcon for the first time in the film reminds viewers they are witnessing what feels like the first truly new Star Wars since 1983. The energy, humor (so crucial) and emotional attachment bestowed by the return of beloved characters like Han Solo (Harrison Ford) and Chewbacca cannot be undersold. Seeing such familiar heroic faces, aged as they are, on the big screen for the first time in more than 30 years doing new things certainly highlights this latest Star Wars.

Innumerable small pleasures—Easter eggs calling back to the original film—pop up in every scene. The surprisingly divisive Abrams—I didn’t notice much lens flare—and co-screenwriter Lawrence Kasdan, who helped write The Empire Strikes Back and Return of the Jedi, have intriguingly created a film that expands on the universe while also sort of rebooting it.

The Force Awakens cribs a lot of its key plot points from the first Star Wars: Young heroes dreaming of adventure on a desolate desert planet, musical cantinas popular with aliens of all sizes and shapes and a climactic X-Wing run on a massive Imperial base all feel familiar without feeling unoriginal. Abrams is no Steven Spielberg, though his work could be called Spielbergian; see Super 8. His entry in the Star Wars canon feels like the closest we’ll ever get to an episode helmed by Lucas’ Indiana Jones collaborator.

The universe is strengthened by the vitality of the series’ new heroes and villains, especially as they interact so much with everyone’s favorite smuggler and walking carpet. Ridley and Boyega easily earn their place in franchise lore as they sweetly, humorously and heroically tackle the new Empire and its villainous practitioner of the Dark Side, Kylo Ren. Driver (best known from HBO’s “Girls”) imbues Kylo Ren with the fear, anger, hate and suffering so very befitting of the late Darth Vader. The film’s other new hero, Oscar Isaac’s dashing pilot Poe Dameron, finally makes good on the promise of Wedge Antilles, an X-Wing pilot who never could get out of the shadow of Luke Skywalker. In his first appearance, BB-8 is a sweet but not cloying addition to the series’ longtime droid duo, R2-D2 and C-3PO.

Other exciting new characters of note are Domhnall Gleeson’s Grand Moff Tarkin wannabe General Hux and the silver-armored stormtrooper Captain Phasma (Gwendoline Christie from “Game of Thrones”). The jury is still out on whether or not Supreme Commander Snoke (Andy Serkis), who gives off a little too much of a Voldemort vibe, is a worthy successor to Emperor Palpatine.

Ultimately, few reviews can do justice to the overwhelming sense of excitement, joy and relief generated by such a satisfying new Star Wars film. If the prequels were made for a new generation of Star Wars fans, The Force Awakens fittingly bridges the gap between those newer, younger fans and the generation that grew up lovingly obsessed with the original universe. We have long wanted and deserved a new film in the franchise starring Ford, Hamill and Fisher. Fortunately, The Force Awakens was just what the franchise—and its fans—needed.