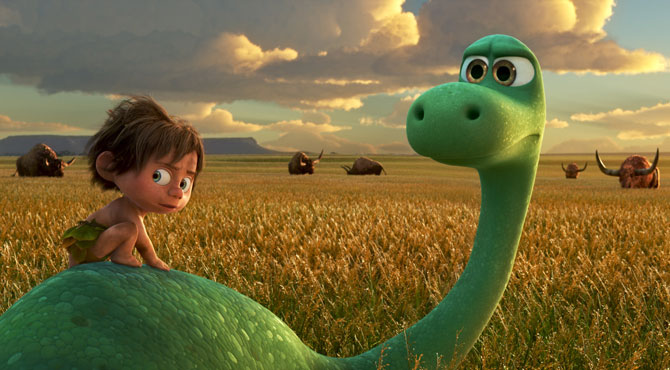 The Good Dinosaur has a more troubled production history than most Pixar films, as the original director, Up co-director Bob Peterson, was replaced by Peter Sohn and the narrative completely reworked. The changes could not quite turn The Good Dinosaur from an OK animated feature to what audiences typically expect from Pixar (see this past summer’s Inside Out).

A young dinosaur named Arlo (v. Raymond Ochoa) must find his way home with the help of his tiny caveman pet, Spot (v. Jack Bright). Along the way, the duo must face off against carnivorous pterodactyls led by Steve Zahn and help a trio of T-Rexes (voiced by Anna Paquin, A.J. Buckley and Sam Elliott) recover their longhorns from some velociraptor rustlers.

Unlike other, superior animated films, the characters of The Good Dinosaur are, at best, unmemorable and, at worst, unappealing. The relationship between Arlo and Spot and the T-Rexes provide some rare highlights, but the pterodactyl terror feels outdated, like unused alligator sequences from The Rescuers. Also, the death of Arlo’s Poppa (v. Jeffrey Wright) has absolutely no narrative purpose, as the movie is not about Arlo dealing with his dad’s death. The stakes are high enough when Arlo is swept downriver, away from his family farm with only Spot to assist him.

The movie feels like it continues to add obstacles when enough already exist, making Arlo’s journey and, subsequently, the audience’s experience more arduous than triumphant. The Good Dinosaur is top-shelf kids’ entertainment relative to its competition, but it’s definitely a lower-middle-tier entry in the Disney canon.