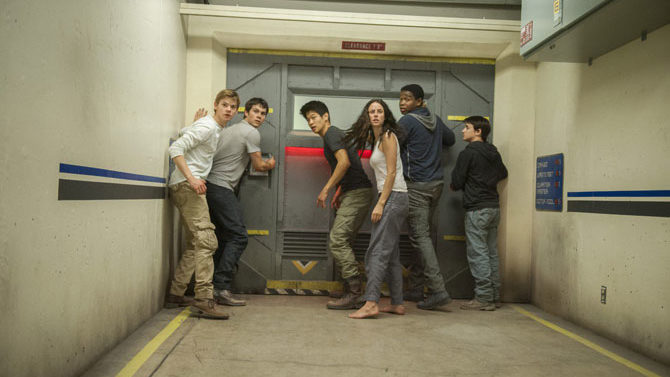 Teen hero Thomas (Dylan O’Brien, MTV’s “Teen Wolf”) and his gang have traded the Glade and its maze for a compound run by a guy played by the supremely untrustworthy Aiden Gillen (he’s Littlefinger on HBO’s “Game of Thrones”). Eventually, Thomas discovers what the audience knew via casting and escapes into the desert wasteland known as the Scorch, where zombie-like infecteds called Cranks roam.

Two things change from The Maze Runner to its sequel, The Scorch Trials; one for the better, one not so much. Hitting the positive first, The Scorch Trials actually has some adults, and the cast is strong. Gillen, Patricia Clarkson (returning from The Maze Runner), Giancarlo Esposito, Alan Tudyk, Barry Pepper and Lili Taylor up the previous movie’s talent level significantly. Esposito alone makes a huge difference as your post-apocalyptic necessity, a leader of a gang of survivors, and he gives the character a humor and depth that is much more inspired than he sounds.

Unfortunately, The Maze Runner’s strongest attribute was its central mystery, which has now been solved and replaced by zombies, No. 1 on a list of abused genre tropes. The post-apocalyptic YA dystopia of The Scorch Trials is hard to distinguish from that of Divergent or The Hunger Games; I guess it is now the only one with zombies.

This ugly, dark movie climaxes multiple times before coming to its overdue conclusion. At least The Maze Runner had a fresh-feeling gimmick, though it grew stale as soon as the maze was solved. The Scorch Trials does not even have a maze but feels much more lost.