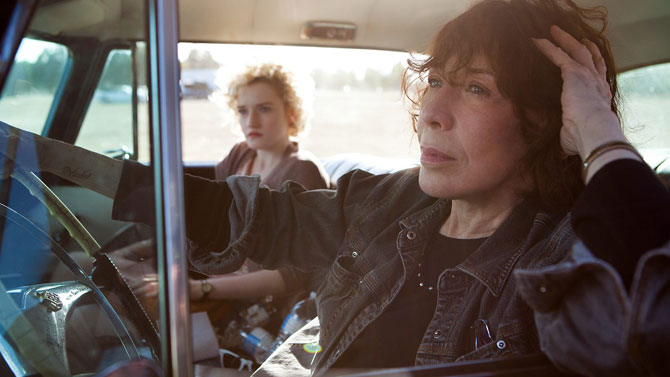 Not a darn thing about Grandma will surprise moviegoers, but that truth need take nothing away from this highly entertaining dramedy anchored by an expectedly acerbic and witty performance from Lily Tomlin. Years ago, Elle Reid (Tomlin) was a successful poet. Now she is an angry, aged lesbian whose latest relationship, with a pretty younger woman (Judy Greer), has just ended when her granddaughter, Sage (Julia Garner, familiar from Martha Marcy May Marlene and the unfairly underseen We Are What We Are), appears on her doorstep, needing money for an abortion.

Both women are afraid to go to Sage’s mother (Marcia Gay Harden), a high-powered attorney. The material is serious—abortion is no laughing matter—but Elle’s visits to old acquaintances like Deathy (Laverne Cox, an “Orange Is the New Black” MVP), Carla (Elizabeth Peña) and Carl (Sam Elliott) lead to awkwardly humorous encounters.

Writer-director Paul Weitz has carved a decent career out of lower-profile movies (American Pie, About a Boy and In Good Company are highlights) than his brother Chris (The Golden Compass and The Twilight Saga: New Moon). But Paul’s smaller ambitions have been better, due to their larger heart and humanity. Grandma is no different. A small, sweet film about family, aging and forgiveness— enlarged by Tomlin’s sure-to-be shortlisted performance. Elliott need not be overlooked in his brief, heart wrenching moments, as tender as anything he’s ever done. The abortion plot point might make some moviegoers squeamish, but it is handled with sensitivity, so do not let it keep you from a delightful film sure to appease its target audience—anyone who is or has a grandma.