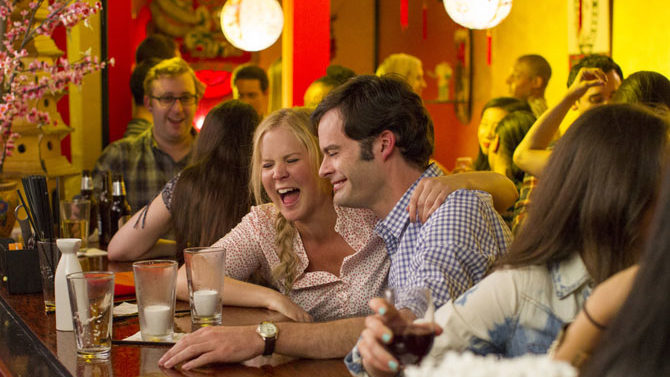 Filmmaker Judd Apatow’s first extra-base hit since Knocked Up (Funny People was clearly a single, while he surprisingly struck out looking with This Is 40) should turn funnywoman Amy Schumer into a far more deserving superstar than Katherine Heigl, even if her Trainwreck shtick closely resembles what Mindy Kaling has been doing on TV for the past few years with “The Mindy Project.”

Magazine writer Amy stumbles through a series of drunken one-night stands, while justifying her hard-partying lifestyle based on her parents’ failed marriage. Mostly, it’s the fault of her dad, played by Colin Quinn, who pooh-poohed monogamy when she was at an impressionable age. Then, Amy meets sports doc Aaron Conners (Bill Hader, a supporting player long in need of a shot at a big screen lead) and falls in love. But can she stay in love? Supporting roles are key to successful comedies, and Trainwreck benefits from Lebron James, who will be starring in his own, hopefully better than Shaq’s, movies one day, and a very game John Cena. However, Trainwreck is Schumer’s show. She is the star, and it’s her script. Like cookie-cutter romcoms, Trainwreck still sells a this-or-that brand of happiness, but at least it’s not the ugly, old-fashioned career-or-love dilemma which used to saddle poor Brittany Murphy.

Amy has to give up casual sex and drinking, which the film posits as her growing up. Also a producer of Lena Dunham’s “Girls,” Apatow is doing everything he can to elevate female comics. Though not as funny as this summer’s other big female headlined comedy, Spy, Trainwreck does not derail Schumer’s ascent to stardom or Apatow’s smart comic reputation.