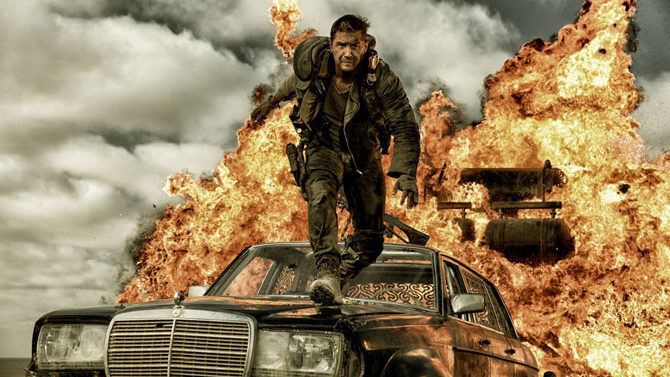 We have not visited the dystopian and at this point, way-post apocalyptic Australia of George Miller’s Mad Max since the former cop and Tina Turner went Beyond Thunderdome in 1985. The years have not been kind to the monosyllabic, wasteland hero—we are reacquainted with Max Rockatansky (formerly Mel Gibson, now Tom Hardy) as he is captured by a gang known as the War Boys—but the series has aged beautifully. Still in the hands of Miller (it’s not impossible to imagine the nightmare into which this glorious action film could have devolved had its creative reins been handed over to another filmmaker), Mad Max: Fury Road, aka Mad Max 4, sets a blistering pace from the start and barely slows down for two hours. Forget the usual action movie pacing to which one has grown accustomed (think Transformers or any other Michael Bay opus). That sluggish behemoth was left in the dust miles ago. Fury Road burns with an intensity unseen in any recent, big-screen action extravaganza.

Max’s imprisonment by the War Boys is merely the grisly meet-cute for the titular protagonist and the film’s true hero, Imperator Furiosa (Charlize Theron, who I wish had used her native South African accent), who is quietly attempting to escape with the five wives—Toast the Knowing (Lenny Kravitz’s daughter, Zoe), the Splendid Angharad, Capable (Elvis’s granddaughter Riley Keough), The Dag and Cheedo the Fragile (are these names great or what?)— of King Immortan Joe (Hugh Keays-Burn, or Toecutter from the original Mad Max), who answers the question of what would happen if Rob Zombie took over after the apocalypse.

Joe sends the War Pigs, along with his allies from Gastown and The Bullet Farm, in hot pursuit of Furiosa’s heavily-armored War Pig gasoline tanker. Leading the charge is Nux (Nicholas Hoult), who happens to be strapped to a familiar blood bag named Max. In the ensuing chase, Max is freed and winds up helping escort the women to the “Green Place” of Furiosa’s youth. Joe continues to give chase.

Mad Max: Fury Road uses little more narrative than that to fuel its supercharged two hours of motorized mayhem. When I say the film rarely stops moving, I mean that literally in the old-fashioned meaning of the word. Miller needs no pit stops for exposition or character development; it all happens in the vehicle at however fast a giant truck can roll through an endless desert. Even if one has never seen a previous Mad Max movie, one can pick up the subtle nuances of his not quite six-odd foot of grunt. Yes, the dead girl who keeps appearing to him is his deceased daughter; that’s all you really need to know of Max’s troubled past.

Delving deeper into the backstory of Furiosa would be fascinating, but that sort of indulgence is best left to comic books and sequels. Give us more chase!

And more chases are what Fury Road delivers. Impressively choreographed car stunts highlight the wildly inventive character and vehicle design. Joe’s automobile army consists of cars built on top of cars on top of cars; it’s that rare R-rated movie with exciting toy line potential (even more than Terminator 2!). Joe even has a mobilized amplifier for his traveling electric guitarist, the most spectacular image from a film composed primarily of spectacular images. The post-apocalyptic wasteland has never looked this vibrant, not even in the candy-colored world of the video game, Borderlands, which was heavily, if not completely, influenced by The Road Warrior.

As the worlds of video games and movies continue to converge, Fury Road is a rare, recent action film that I’m happy just to watch (and watch again). Miller proves septuagenarians supply their action with every bit as much kinetic energy as their 20- to 30-something peers, yet have the experience to understand the importance of shooting with clarity. Not one artful moment of freneticism was lost to indulgent camerawork.

If anything about Mad Max: Fury Road underwhelms, it is Max himself. Though Hardy capably takes over for Mel, Max himself feels less than consequential, as if he appears to justify the use of his name for brand recognition.

Despite the complaints from deluded “Men’s Rights Groups,” Fury Road’s lack of Max-centeredness does not further some insidious feminist agenda. It’s just good storytelling. Furiosa is a badass, and Max cannot defeat Joe and his War Pigs by his badass alone. A shorn Theron reminds viewers of her versatility and toughness; she has needed, and deserves, an action role like Furiosa. Supposedly, a Furiousa-focused sequel has already been written. It will be interesting to see how Mad Max develops and upon whom it focuses if this series continues. This trip down Fury Road shows Mad Max will be going to interesting places, so long as Miller is behind the wheel.

Ted Cruz Wants to Repeal All the Things

Athens Power Rankings for the Week of May 18