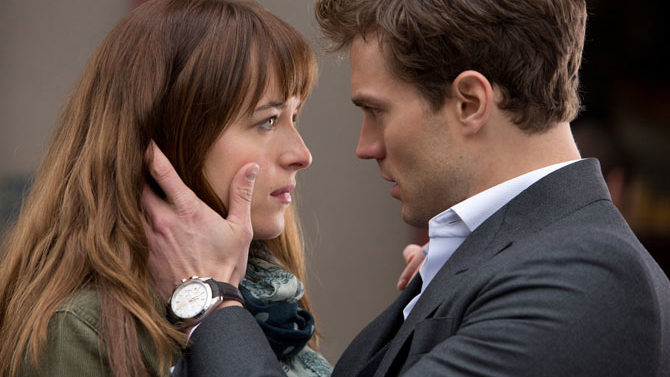 Let’s cut to the chase. Fifty Shades of Grey is not the abysmal train wreck assumed by the pre-movie buzz regarding the leads’ dislike for one another. Merle Oberon and Laurence Olivier hated each other (legend has it Oberon ate garlic prior to filming the climactic kiss on the moors), and Wuthering Heights worked out all right. I am not comparing Dakota Johnson and Jamie Dornan to Oberon and Olivier or E.L. James’ BDSM bestseller to Emily Bronte’s classic of English-Gothic romanticism. Despite their share of cringeworthy moments, director Sam Taylor-Johnson (Nowhere Boy) and writer Kelly Marcel (Saving Mrs. Banks) largely craft an entertaining adaptation out of this easy-to-disdain, worldwide phenomenon.

Not much else happens, though it is a trilogy, so one must assume the narrative eventually takes a dramatic twist or two. The movie boasts a lot of foreplay and never really lets its kinky side out; one assumes the filmmakers’ safe word was “R-rating.”

Tonally, Fifty Shades pulls off a rather nice balancing act. Several early scenes between Ana and Christian have a playfulness belying the ultimate nature of his sexual proclivities, which Taylor-Johnson films tastefully, if rather unerotically. While that stylish class might have been enough to surpass my lowest expectations, I am far from its target demographic, who might be left wanting by this (kind of) flesh-and-blood Mr. Grey.