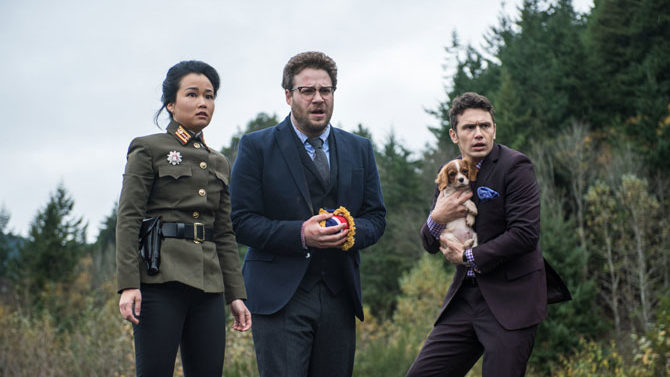 Well, the terrorists didn’t win, but did moviegoers, when Sony relented and released The Interview to a handful of theaters and video on demand? Everyone, including your grandmother, knows about The Interview, the latest raunchy comedy from Seth Rogen and Evan Goldberg, the writing duo who hit it big with Superbad and graduated into directing with This Is the End.

Rogen again teams up with his Pineapple Express pal, James Franco, as a producer and TV talk show host whose exclusive interview with North Korean dictator Kim Jong-un is coopted into an assassination attempt by the CIA. The result is an over-long, over-dumb but consistently funny flick. Rogen is at his humorous, hangdog best, which is fortunate, because Franco is at his hammy worst. As a duplicitous Kim Jong-un, Randall Park (very good on HBO’s “Veep”) out-duels Franco in their many scenes of bacchanalian revelry, highlighted by an explosively good time joyriding in a Soviet tank.

Rogen and Goldberg’s sophomoric tendencies, smartly filtered by screenwriter and “Daily Show” producer Dan Sterling, are not on the satiric level of “South Park’s” Trey Parker and Matt Stone, who poked fun at the hermit kingdom more powerfully with Team America: World Police, but The Interview is not a joyless, comic endeavor whose best parts were revealed in the trailer. If those couple of previewed minutes made you giggle, the rest of the movie will make you laugh.