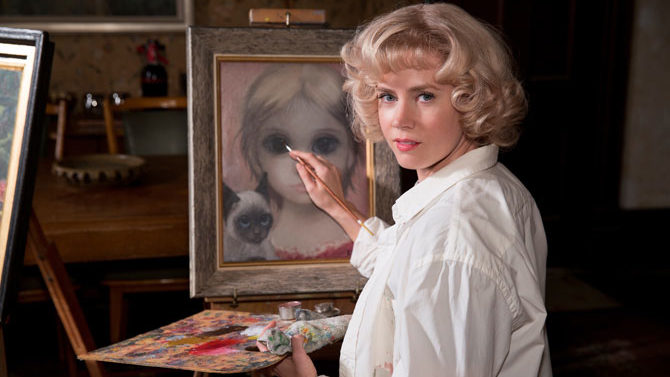 Tim Burton garnered some of the best reviews of his career the last time he went more adult-drama than fantastical-tale in Big Fish (2003). Big Eyes shares more DNA with Big Fish than with Burton’s biggest box office success, Alice in Wonderland. Big Eyes, based on a true story, refers to the successful series of paintings and reproductions supposedly created by American artist Walter Keane (Christoph Waltz).

According to the federal courts and to the film, which was written by People vs. Larry Flynt writers Scott Alexander and Larry Karaszewski, the paintings credited to Walter Keane were actually the work of his wife, Margaret (Amy Adams).

Eventually tiring of Keane’s lying and bullying, Margaret ran off with Jane, her daughter from a previous marriage. Then the legal struggles began. As with Big Fish, Burton’s distinctive fingerprints can barely be identified. That one scene where Margaret sees big-eyed people in the grocery store is the sole evidence that springs to mind. Big Eyes drops the ball as a distinctive Burton film and as an indictment of “Mad Men”-era treatment of women, but it does recount an interesting, if ultimately slight, pop-culture footnote from the last half of the 20th Century.

Adams and Waltz, both of whom were nominated for Golden Globes (a feat unlikely to be repeated by the Academy), are spot-on, as usual. Waltz remains mesmerizing, as ever. His smooth-talking Walter makes it easy to believe that everyone is swallowing his lies. Supporting players Jason Schwartzman, Jon Polito and Danny Huston also have fun as a rival art dealer, club owner and gossip columnist, respectively. Unforgivingly, Terence Stamp is not given enough to do. Far from Burton’s best work, at least it has spared us from the inevitable Alice sequel for a while.